Land That I Love 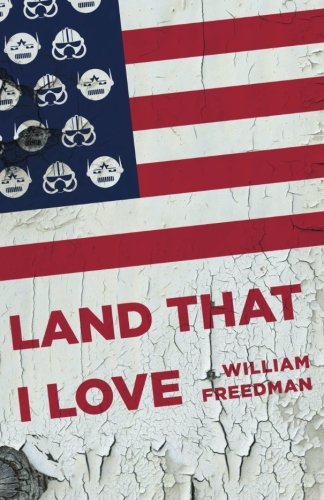 “Perhaps Land that I Love would have succeeded in another vehicle. As a graphic novel, one can see its over-the-top explanations and absurd characters working quite well. But when tethered to a black and white page and hindered by the lack of visual vibrancy, Land That I Love has to compensate too much.”

Where does one begin with Land That I Love? On one hand, it’s a funny political satire. On the other, it’s a perfect example of how a great story can be crippled by too much awesomeness. No, seriously. Though Land That I Love is a fun book with a good plot and memorable characters, it fails simply because it’s packed with too much information.

And that’s a shame too. There’s so much story—so much personality—bursting against the binding of this book, that it dwarfs just about any other satire on the shelves. But then again, the sheer enormity of . . . well, everything in the book, is also Land That I Love’s greatest vice.

Any reader picking up a satirical novel needs to realize that what they’re reading will be some sort of mimicry or caricature of society and politics; however, there is a fine line between witty commentary and lame attempts at humor. And any satire worth it’s salt can’t play both sides of the fence.

Unfortunately for author William Freedman’s readers, the potential of Land That I Love is buried with this constant pandering between genuinely hilarious laugh-out-loud satire, and so-called “dead writing” that it’s too wishy-washy to truly enjoy.

That isn’t to say that Land That I Love is all bad. There is some razor-sharp wit buried in there—if you sift between the pages. Mr. Freedman obviously knows what he wants to write, and how to get his point across—he just likes to bury all of that writing underneath a mountain of lukewarm jokes. This is frustrating to the discerning reader, because fans of satire will be able to sense something truly great hidden between the lines. Almost Douglas Adams-esque in parts, Land That I Love obviously has potential, but stops short of truly exploring said potential.

The plot itself is also a bit of a beast. One can tell that there is an excellent political romp stashed somewhere between the lines, but it’s hampered by an encyclopedia’s worth of tangential names and places. The same thing goes for characters. There are some shining personalities, but they all clash and batter each other too thoroughly. This myriad of interactions—and the jerky transitions between them—causes readers to get caught up in simply trying to tell people apart.

Perhaps Land that I Love would have succeeded in another vehicle. As a graphic novel, one can see its over-the-top explanations and absurd characters working quite well. But when tethered to a black and white page and hindered by the lack of visual vibrancy, Land That I Love has to compensate too much.

Give this book a web series, a comic book—something that will allow it to shout and bellow at readers without having to go into overdrive.