This Land: How Cowboys, Capitalism, and Corruption Are Ruining the American West 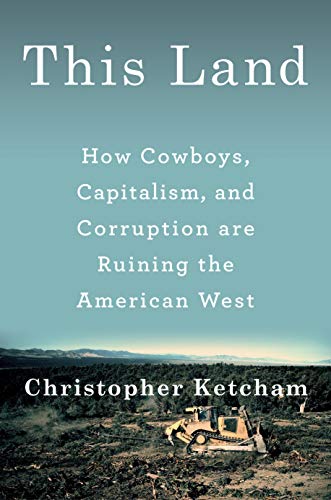 “A single cow can deposit over a ton of waste on the ground every month with a high percentage of that waste seeping into surface water. It is no surprise that just about every stream on public lands polluted by livestock surges with E. coli bacterial contamination during the grazing season.”

Reading Ketcham’s elegiac This Land: How Cowboys, Capitalism, and Corruption are Ruining the American West incites the sense of a historic breach in the dam of reality versus the marketing of environmental stewardship for America’s public lands. This book should be required reading for all high school students, elected officials, and environmental advocacy groups.

Money truly is the unifying corrupter, as detailed again and again in Ketcham’s treatise. He reveals how Democratic and Republican leaders have both sold the rights to national lands for pennies compared to market rates, which benefit big agriculture and corporate interests. His details of the Department of Interior’s actions under President Obama are a wake-up call to defend what remains of public lands.

Most unforgiveable of the Obama Administration was his signature on not one but two bills that pierced the veil of the heretofore sacrosanct Endangered Species Act, created under the Nixon Administration. This declares open season on the wolf and other species.

You may not like what Ketcham has to say, but it will provoke discussion about the right of all Americans to preserve and enjoy their public lands, which are not just meant for those in close proximity.

Given that less than two percent of U.S. beef is grown on public land, the level of environmental waste and destruction is colossal and benefits a few ranchers, many of them wealthy. Ketcham makes the case that if all grazing on public lands was stopped it would not impact availability of beef or prices, as most American beef is produced in feed lots.

For the eleven western states, livestock grazing on public lands accounts for just one half a percent of revenues or a dollar for every $2,500 produced in that same region.” A 1997 study of the Colorado Plateau, whose boundaries include Utah, reported that centuries of cattle grazing catalyzed the most severe vegetation changes in 5,400 years. Because of rampant over grazing in the Great Basin, an area the size of California, was by the 1990s on the edge of ecological collapse.”

“Ninety-five percent of all public land stream dewatering is caused by stockmen who divert the natural flow to water their cattle or grow hay.”

Ketcham reveals private cattle producers pay $21 per AUM (a measure of cattle production) versus $1.41 for beef grown on public lands. This is both anti-capitalistic and a rip-off of the American tax payers. Ecologically, the barrage of beef production in the west leads to destruction of prairie lands, native animals, and the top soil—look at west Texas for an example of prairie destruction.

“A single cow can deposit over a ton of waste on the ground every month with a high percentage of that waste seeping into surface water. It is no surprise that just about every stream on public lands polluted by livestock surges with E. coli bacterial contamination during the grazing season.”

Lest you think it is only Ketcham with the sharp pen toward rancher’s opportunism on public lands, columnist George Will opined that an inner-city mother on public assistance was the “soul of self-reliance compared to a westerner who receives federally subsidized range privileges.” As much as ranchers rage against socialism, that is precisely what their government subsidized range permits are: socialism for the rich.

“In 2014, Congressman Raul Grijalva of Arizona, ranking member of the Public Lands and Environmental Regulation became so concerned about these developments he asked the Inspector General of the Department of Interior to investigate a lobbying group, American Legislative Exchange Council (ALEC) for its self-serving efforts to abrogate the federal laws for land management.”

As demonstrated by the Trump Administration, the goal is to subvert federal laws for land management, through eliminating any descent by firing overseers of public lands whom disagree, including biologists, and other scientists. The current Republican goal is to maintain the super majority. The firing of federal employees began with the George W Bush Administration who pink slipped many federal judges because they could not be counted on to vote in favor of Republican dogma. Attempts to stifle the voices of at least half of the nation, through reduced representation in the courts and government agencies is nothing less than subverting democracy.

Ketcham’s scorched earth review of all guilty parties includes multiple examples of the Mormon domination of local, state, and government agencies with control over public lands. “Until 1927 all Latter-day Saints who joined the church swore an oath against the United States to avenge the blood of their prophets, Joseph and Hyrum Smith. To this day, there isn’t a single Congressional delegate from Utah who isn’t Mormon. In Utah and Nevada, vast acreage of public lands has been ceded to the private sector to benefit a few people.”

Ketcham masterfully invokes history while looping in the Cliven Bundy Klan takeover of public lands, refusal to pay leasing fees, and threatening the government employees. Of great concern is the repeated trashing of public laws and lands that goes unpunished and robs our nation of protections that were approved by Congress. The promulgators of the Malheur Wildlife Refuge standoff, Dwight and Steve Hammond were, were given a pardon by President Trump. Yet another example of Trump flipping the bird to environmental and civil liberty groups.

“I could leave off here, the Grand Staircase a broken thing, its progressive experiment ended, the Bundy’s running victory laps, the civil servants of the public lands demoralized beyond any experience in their lifetimes, while an oligarch thug in the White House, naked in his hostility to environmental law and protections, nods approvingly.”

America has already lost seminal species such as the North American cheetah, wolves are mostly extinct, and bird populations are reduced by 50%. Even in environmentally friendly states like Washington and Oregon, the sage biome, which supports so much life, has been 90% eliminated. If you head east from Walla Walla you will encounter a bit of the sage, soon to be eclipsed by the controlled and chemically fortified wine industry.

In 2017, the sacred Environmental Species Act continued to dissolve, impacting the grizzly bear, where it is now open season on these amazing creatures outside of Yellowstone National Park. As of this review, there are thought to be a small grizzly population in the Okanagan in Washington State, just a hair’s breadth from Idaho. Grizzlies were de-listed in June 2017 under the Obama Administration. Plaintiffs to this egregious act included: The Sierra Club, Center for Biological Diversity, National Parks Conservation Association, and the Humane Society of the United States. Female grizzlies rely on white bark pine forests, and 75% of these trees have been destroyed. Wyoming’s grizzly specialist in fact, killed a grizzly, without provocation, within 25 feet of the bear, which is illegal.

This Land is a depressing but engrossing tome and is a must read to better understand public land mismanagement. The book is replete with ample testimony from Fish and Wildlife, Forest Service, and Bureau of Land Management employees who were muted, harassed, and forced out when they dared to publish scientific results that would interfere with profiteering on public lands. These people, heroes all, deserve the Congressional Medal of Honor. Full stop.