In the Land of Armadillos: Stories 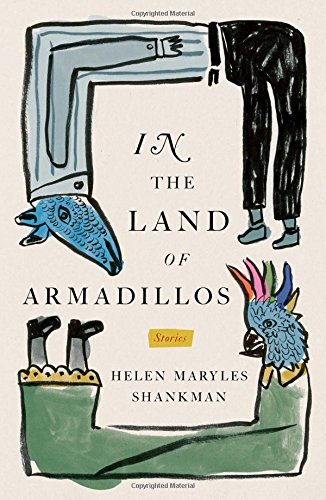 Following in the footsteps of Isaac Beshevis Singer and Shalom Aleichem, Helen Maryles Shankman is an exquisite storyteller of early 20th century Eastern European Jewish life. Her connected short stories from In the Land of Armadillos carry the reader deeply within Nazi-occupied Wlodawa Poland, where the Jewish community is rapidly decimated.

Wlodawa Jews who have not been shot or sent to concentration camps are put to slave labor serving the Reich and its local leader, the enigmatic Willy Reinhart. In 1942 Poland, Nazi Germany does what it pleases and a Jewish life is worthless. These are stories of love, hate, mystery, danger, and survival told in colorful detail.

In one story, a Nazi officer who has occupied a villa in Wlodawa forces a Jewish artist to paint storybook characters on a wall for his young son. At the same, he is murdering the artist’s family. The more he struggles to help the artist, the more ill and morose the artist becomes. The ending is a complete bombshell.

In another story, an unwilling Messiah visits Jewish families in Wlodawa. Although he desires nothing more than to “quit” as savior, he is forced to watch as Nazis commit genocide upon members of his ancient religion. Drawn into the debacle, only he can save lives—or not.

A rabid anti-Semite who has been hunting Jews for the SS is forced to care for a young Jewish girl who seems to have the power to speak with his dog and to disappear at critical times. The more he is forced to hide the girl, the more he fears discovery by his friends and the Gestapo. The hunter soon becomes the hunted.

Walking through each story is the mysterious Willy Reinhart. He develops a reputation for rescuing Jews for his own purposes. The more Jews he protects, the more he is scrutinized by the Gestapo. The dichotomy of respect and derision, saving and murdering of innocent people, resonates throughout the stories.

By focusing on one Jewish community in Poland and the Nazis who control and murder Jews there at will, Shankman produces a litany of deeply expressive stories and unforgettable characters, including a golem.

Readers of In the Land of Armadillos will encounter vibrant tales of extraordinary people, good and evil, in a twisted, macabre life. Here, the old rules are no longer valid. Subjected to inhumane conditions, with brutality and death around every turn, Shankman’s characters alternately perpetrate and combat hatred while sliding inexorably toward a dark and surreptitious future.