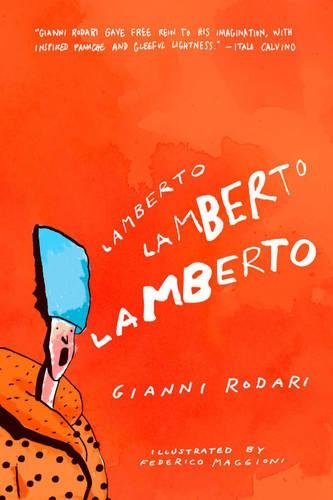 “With his story of a chant that transforms a decrepit man, Mr. Rodari grants us the possibility that words can also alter a world gone awry—at least in fairy tales.”

Once upon a time there was a very rich old man who lived in a grand villa on a tiny island in a mystical lake. The baron’s tranquil life turns topsy turvy after he learns from an Egyptian fakir a priceless secret: “The man whose name is spoken remains alive.”

Published for the first time in English with a sprightly and faithful translation by Mr. Shugaar, here at last is an opportunity for a new audience to discover the imaginative Italian children’s author Gianni Rodari, few of whose books have appeared in the U.S.

When this novel first appeared in Italy in 1978, it carried a more evocative title that means Twice Upon a Time There was Baron Lamberto, but its impact was diluted by cartoonish illustrations suitable for more innocent stories. Happily, this edition captures the author’s free-flowing spirit both in words and in Mr. Maggioni’s witty, exaggerated drawings.

Readers, beware: You must abandon all hope of normality upon entering this wild satire set on the northern Italian island of San Giulio, where, according to legends, Saint Julius cast out dragons. The locale also happens to be across from the town where Mr. Rodari grew up, on Lake Orta. Give yourself up to this insightful tour guide, and you might just find yourself confronting the absurdities of your own life.

Our preposterous protagonist is a 93-year-old aristocrat with 24 banks, 24 illnesses, a scattering of mansions, and five cellars crammed with memorabilia. Most significantly, a strange experiment is underway at his villa on San Guilio. Up in the attic, six employees take shifts around the clock, chanting his name: “Lamberto, Lamberto, Lamberto.”

For a while, only the baron and his butler Anselmo understand this odd work brings about the magnate’s startling rejuvenation. Soon Lamberto’s bald pate sprouts blond ringlets. He shreds his maladies and his wrinkles and takes up boxing, chopping wood, and swimming around the island.

The fabulously fortunate baron has lost his wrinkles but not his enemies. His sole surviving relative, Ottavio, arrives at the villa and is alarmed to discover his uncle is getting younger instead of older. How on earth will the young fop pay his debts and maintain his louche lifestyle if Lamberto doesn’t hurry up and die? The novel dips into a darker, more outlandish tone as Ottavio tries to murder his way to financial bliss.

Any commoner can have an enemy. In the case of this magnate, why not multiply that—say, by 24? The once bucolic island is taken over by the 24-L Gang, two dozen banditi all named . . . Lamberto! The author’s whirlpool of absurdity churns up not only laughter but also somber reflections.

The fictional kidnapping of the baron echoes the 1978 abduction and assassination of Italy’s former prime minister Aldo Moro by the Red Brigades, a Marxist-Leninist paramilitary group. Mr. Moro had alarmed both the right wing and the extreme left wing by negotiating a historic agreement to form a coalition government with the Italian Communist Party.

The terrorists, their demands unmet after 55 days, dumped his dead body in the trunk of a car parked by an ancient Roman amphitheater where slaves and prisoners once entertained throngs by fighting to their death.

The novelist points to the complicity of a society driven by a herd mentality, focusing on the trappings of life rather than the underlying reality. The locals respond to the baron’s kidnapping by turning the town into a tourist trap. They’re consumed with ridiculous gossip and a desire to profit during this “non-stop cinematic spectacle.” They’re selling balloons, peanuts, and even pictures of the Colosseum.

Mr. Rodari wryly observes, “There’s always someone who will buy anything, whatever the weather.”

The excitement is infectious. Journalists arrive in droves, but fail to investigate the increasing danger, as the bandits demand a $24 million ransom from the baron’s 24 bank mangers. Instead these reporters squander time and opportunities by asking frivolous, irrelevant questions. (Readers, does this not sound all-too-familiar?) They present a tragic contrast with the bold real-life journalist Mino Pecorelli, who wrote critically of the government’s refusal to negotiate with the terrorists in order to save Moro. That maverick was shot to death in Rome a year after the prime minister’s assassination.

In this riotous satire, everybody’s reluctant to think but always ready for fun. Neither Ottavio nor the 24 gray-suited bank managers charged with responding to the kidnappers, deign to take the threat seriously, focusing instead on their own comforts.

Even after the managers start to receive letters containing bits of the baron—a finger, an ear—they refuse to pay the sum demanded. The bourgeois bankers are more concerned with getting a good night’s sleep in the elegant villa they’re renting nearby. Even the baron laughs off his predicament, as his sliced-off body parts grow back in fairy-tale fashion, thanks to the sequestered workers repeating his name.

Defying expectations, Mr. Rodari refuses to represent the terrorists as evil. Instead, he shows them as dimwitted as the other characters: “They think and think, but it's like scratching away at a marble wall: nothing comes loose . . . ."

Notably, the author creates a likable character who distinguishes herself from the unthinking masses. Señorina Delfina, adroit and imaginative, is the only one of the six workers who has questioned the relevance of their labor in the attic. She has pierced the ridiculous façade of the self-absorbed Ottavio and of the baron himself. And as all the villains’ plots falter, she whips up a surprising and satisfying slice of poetic justice for Lamberto.

In upholding Delfina as his lone admirable character, Mr. Rodari reveals the kind of people he believes any healthy society needs. In The Grammar of Fantasy (1996), he wrote:

“If a society based on the myth of productivity (and on the reality of profit) needs only half human beings—loyal executors, busy imitators, and docile instruments without a will of their own—that means there is something wrong with this society and it needs to be changed. To change it, creative humans are needed. . . .”

With his story of a chant that transforms a decrepit man, Mr. Rodari grants us the possibility that words can also alter a world gone awry—at least in fairy tales.