Lafcadio Hearn's "The Faceless Ghost" and Other Macabre Tales from Japan: A Graphic Novel 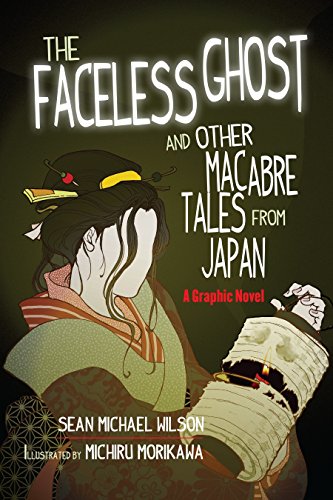 With Japanese ghosts and demons, author Sean Michael Wilson and illustrator Michiru Morikawa have created cultural Scary Stories to Tell in the Dark in comic form. Eerie and macabre many of these tales will get a reader’s heart racing—from the anger of the snow woman to the faceless ghost. These are stories about revenge and anger, loss and pain.

These folktales are retold from Lafcadio Hearn’s collections. Hearn was an international writer, known most for his Japanese tales (he even adopted a Japanese name)—he collected legends and ghost stories, which were widely translated and reprinted, finding their way today into this collection of Wilson’s.

There are six tales in this graphic novel collection, each one with its own lesson to learn. “Diplomacy” is the best tale of all and opens the volume. A man sentenced to death threatens to haunt his executioner and family, and, according to legend, a man focused on revenge at the time of death will manage to do as he intends. Without giving it away, there is a fantastic twist to this tale that will leave readers as open-mouthed as the executioner’s servants when he explains what happened.

Other stories are reminiscent of Western tales. “The Snow Woman” has foreseeable twists as a beautiful woman made of snow takes the life of an old man but spares the life of his young and handsome coworker as they wait out a snowstorm.

Other tales have no memorable similarities in Western lore such as “Of a Mirror and a Bell” in which a young woman’s mirror fails to melt in the sacrificial offering to create a bell for the temple because her soul is still attached to her memories and desire for the object. The woman commits suicide to release the object from her grasp, but tale doesn’t end there. “Of a Mirror and a Bell” explains the Japanese word “nazorareu” and its concept, which is a type of voodoo in which a person can use a likeness to substitute for the real thing. Because the woman who loved the mirror cursed the bell by saying whoever could break it would be blessed with money, the monks tossed the bell into the river (because of constant visitors trying to crack it), but villagers created likenesses in order to try and get money anyway. This is a strange story, and one that it is difficult to find the meaning of beyond just accepting it as culturally reflective.

The artwork is simple ink drawings readers of manga will quickly recognize. They suit the stories well as a supporting framework instead of a distraction. Overall, there is nothing spectacular nor disappointing about the artwork—it is well done by a skilled hand but could be mistaken for about a dozen other illustrators of the Japanese style of comics.

This collection is best suited for young readers. Adults who enjoy comics might like to read through this once, but overall it won’t really stick—it is a mediocre comic collection. Japanophiles, however, will want to add this to their Lafcadio Hearn collection. Though the author explained a little bit about himself and his interest in the back of the book, it would have been nice had he chosen to explain why he selected the stories he did.