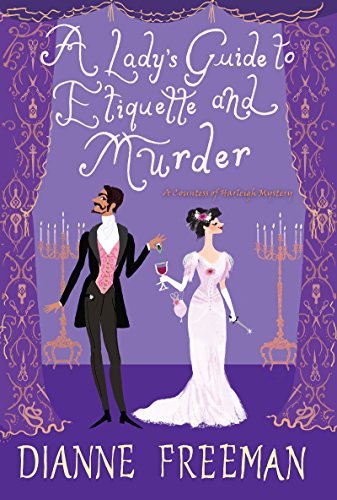 Get ready to curl up with a cup of tea, a plate of scones, and A Lady’s Guide to Etiquette and Murder.

This exciting story has it all: an anonymous letter, a mysterious death, a beautiful widow turned amateur sleuth, and even a handsome neighbor, ready to help with the investigation.

In this historical mystery debut, the reader is taken on a journey back to Victorian England and into the life of Frances Wynn, the American-born Countess of Harleigh. The story begins just as the Countess, who enjoys quite a bit of freedom as a widow, is ready to put aside her mourning black gowns and leave the countryside and her greedy in-laws. She is aghast when she overhears (accidentally, of course) her brother-in-law Graham and wife Delia talking about plans to ask her for more funds to help with repairing the crumbling balconies on the north wall of their country estate.

“Heavens, they spoke as if I were a bank. Graham went to explain some agricultural innovation he wanted to test on the home farm. Poor Delia. All she ever wanted was to be the grand lady, but fate thwarted her at every turn. First, she wasn’t wealthy enough to marry the oldest son and was pawned off on the second. Then, when she finally became a countess, the old manor was falling apart and the coffers were nearly empty.”

Freeman has given the Countess a droll and immensely likeable personality.

In London, the Countess is happy to be finally independent. Along with her young daughter, Rose, she rents a home in the famous Belgravia section. Soon she is busy planning her sister Lily’s first London season and participating in the hectic social life of the London elite.  Her neighbor is none other than the dashing George Hazelton. One of her first visitors is Inspector Delaney from the Metropolitan Police.

“It seems there’s been a development in the matter of your late husband’s death.”

“Perhaps you should sit, ma’am.”

And soon the Countess learns her husband’s death may not have been from a heart attack.

Delaney never took his eyes from my face, “There is a question about the cause of death.”

“The cause of death? He had a heart attack. The doctor who attended him confirmed it.”

But the Countess is hiding something, a grave secret about her husband’s death. At the time this murder investigation is taking place, there is also a series of mysterious burglaries tormenting the London elite. The plucky Countess, with the help from the dashing and chivalrous Mr. George Hazelton, is soon involved in mystery, intrigue, and danger.

The Countess lives in the exclusive world of ballrooms, drawing rooms, maids, and calling cards. Life in Freeman’s Victorian England is filled with deception, secrets, and some fun romance.

Readers will certainly want more of the beautiful, headstrong Countess Frances Wynn after finishing the first book in this brand-new series.