The Lady in Gold: The Extraordinary Tale of Gustav Klimt's Masterpiece, Portrait of Adele Bloch-Bauer 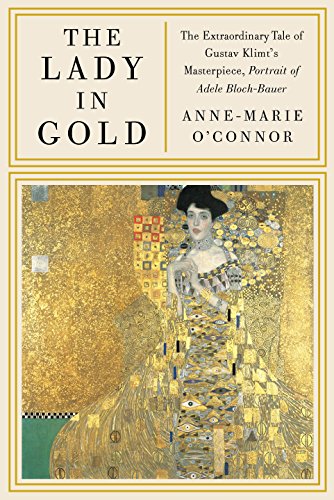 “. . . a real contribution to the copious Holocaust literature. The Lady in Gold will make a great movie.”

Who was it that said that the 20th century constituted the lowest point in human history? Two world wars, a number of major international wars, incessant violence, the reinvention of terrorism, rampant development and spread of nuclear (and who knows what other kinds of arms), etc., etc. etc. And, to top it all off: the Nazi Holocaust.

This book, which is only marginally about Klimt and his painting, is a superb depiction of just how great the late 19th century in Europe was, and just how terrible the 20th century became—from the Sublime to the Abject. Author Anne-Marie O’Connor does not manage to explain how the civilization that created Freud, Wittgenstein, and Klimt went on to create Hitler, but they’re all in the book together, and we watch the whole process at work.

The book’s great virtue is its use of the family chronicle, a literary technique brought to its apex by the great 19th century Russian writer Sergei Aksakov, but also used with consummate skill, for example, by the 20th century German Nobel laureate Thomas Mann in Buddenbrooks.

Ms. O’Connor does not quite reach these levels, but The Lady in Gold does use a particularly effective approach. By tracking the lives of the members of some of the great Viennese families—of whom the “Lady in Gold,” Adele Bloch-Bauer, was one—she recounts not just the terrible tragedies that befell these people, as they went from Shangri-La to concentration camps, but also what happened afterward, as they turned up in Los Angeles or Lima, and how they pulled their families back together when they could.

The great strength of this book is its painstaking psychological reconstructions of its characters as they go to hell and come back. Ms. O’Connor makes us feel the entire experience with them. We all know the story; now we can experience it. That is a real contribution to the copious Holocaust literature. The Lady in Gold will make a great movie.

As one art critic puts it: “[Klimt’s works] are flooded with curves and spirals, mystical whirlpools, and brightly assorted shapes. A newly created world appears around the central figures, enticing the viewer towards the depths of the unconscious and the labyrinths of the mind.” (Klimt by Gilles Néret, Taschen Books, 1993).

Klimt’s masterpiece, “The Lady in Gold,” displays all these qualities. The culture in which Klimt was able to find support and get commissions, that of Vienna at the end of the 19th century, was one in which Klimt’s art scandalized, but nonetheless earned large sums of money.

It was a culture caught between Victorian and modern values, as Freud’s writing (endlessly) attests. There was almost complete tolerance for Jews in this culture, and many of the most important figures of the period were Jewish, like Freud.

The Lady in Gold captures the characters and lives of many of these characters of the time, while concentrating on the life story of Bloch-Bauer: Klimt himself, and his mistress Maria Zimmerman, the Zionist Theodor Herzl, writer Stefan Zweig, composers Gustav Mahler and Arnold Schoenberg. Even the American writer Mark Twain makes a cameo appearance.

At the same time, right-wing newspapers and politicians are already beginning to play the anti-semitism card. Adolf Hitler appears in the book, moving to Vienna in 1907 where he enjoys the charity of several Jewish families after failing as an artist.

Klimt died just as World War I began. The book tracks Adele Bloch-Bauer through an unhappy, childless marriage to her death in 1925. But really, at this point, the story is just beginning.

The reader can see what happens to members of the family and their friends and relations as they go from managing an industrial empire, or composing symphonies, to Dachau or another camp. One Vienna belle becomes a prostitute for Nazi thugs. Some die in the camps; some survive; a few escape before being deported. Some went through a second struggle in the Eastern bloc. Some made it to Israel. The stories are told in great detail and with loving attention to character.

When the lucky ones emerge from the horror, they try to retrieve their possessions back including their art, for the Nazis had stolen everything, including “The Lady in Gold.” But postwar Vienna authorities make a case for their keeping the painting.

The final part of the book looks closely at the survivors as they try to recuperate their possessions. It is a bizarre story, and one in which the Austrian nobleman Count Hubertus Czernin figures as a real hero—lest we be tempted to finger all the Austrians as villains.

Ms. O’Connor is not a great narrator, and she has a weakness for digression that can lead to disaster (there is a section about the Empress Theodora of Byzantium that really reads like a comic book—and how did she get in here anyway?)

But the pathos of a story in which, for example, Stefan Zweig, flees the Nazis, finds himself in a new world, and then commits suicide because he feels he has no place in it, is truly great, and the book tells the story well.

In the end, the book tells what happens to the “Lady in Gold” painting, and how the family finally recovers it, due to the truly superhuman exertions of the grandson of the composer Arnold Schoenberg.

Indeed, a wealth of stories are told well in this expanded family chronicle—though not all end happily. It is the proliferation of these stories and the psychological detail that Ms. O’Connor provides that give the book its quality.
As the X, Y, and Z generations tend to forget all that went before Facebook, perhaps this will help remind them. The stories should hold their attention where the history, perhaps, would normally not.