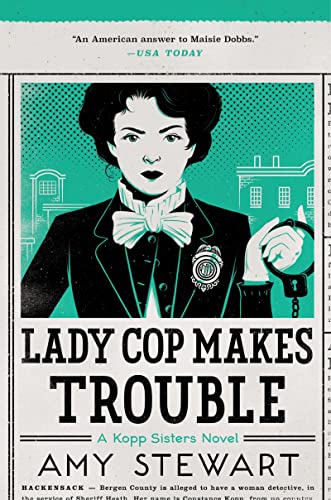 “Kudos to Amy Stewart and Constance Kopp. May there be many more sequels to follow.”

Mystery fans, your demand for a sequel to Amy Stewart’s riveting Girl Waits with Gun (2015) have been answered. Constance Kopp and her sisters return in another adventurous saga based on the events in the life of the historical Constance, one of the first female deputy sheriffs in America.

Constance has settled into her new job as a deputy sheriff. “I’d served divorce papers to an estranged wife, investigated a charge of illegal cohabitation, chased down a girl attempting to run away on the train, put clothes on a prostitute who was found naked and half-dead from opium in a card room above a tailor’s shop, and sat with a mother of three while the sheriff and his men ran through the woods looking for her husband, over whose head she had broken a bottle of brandy . . . Improbably as it may seem, I had, at last, found work that suited me.”

Constance and Sheriff Heath investigate an unsavory man named Harold Meeker, who has been advertising in the newspaper for a housekeeper” who is matrimonially minded.” Several girls had replied according to Mrs. Headison, an unpaid woman policewoman in Paterson, and had been “promised an offer of marriage if she proved worthy of it.”

It is clear to Constance and Sheriff Heath that the man was soliciting young girls for immoral purposes. Since Meeker lives in Bergen County and not the city Paterson, it is up to them to arrest him.

Meeker objects to being arrested, and Constance demonstrates her ability to quell any man resisting arrest. At just under six feet and handy with her revolver, Constance is equal to any male detective.

Not having a badge is not Constance’s only worry. Her sister, Fleurette, is taking drama lessons and plans to become an actress. Norma, the third Kopp sister, is busy training her pigeons for the war effort, and can’t be bothered to discourage Fleurette’s ambitions.

But newspapermen aren’t Mrs. Heath’s only problem. She thinks Constance and her husband spend too much time together and suspects they are having an affair, or that Constance is out to seduce the sheriff, or something else unseemly. And definitely Constance is not to talk to reporters.

“She made it sound disgraceful to be the kind of woman known to reporters. In my case she might have right. Some people aspired to the society page, but I’d only ever been found among the crime reports.”

Her sisters, her lack of a badge, and Mrs. Heath’s unfounded suspicions are not Constance’s only worries; they are not even her worst ones. Herman Albert von Matthesius, a German-speaking prisoner, is in the hospital with some unidentified illness.

Sheriff Heath asks Constance to translate, but during her visit the German escapes. It is Constance’s fault because she has been guarding the wrong room when a storm cuts off the electricity.

What is even worse than letting a prisoner escape and possibly losing her job because of it, is the fact that the sheriff may go to jail. “There is law,” he said, his voice a little hoarse, “that a sheriff can be jailed in place of a criminal he allows to escape.”

To save the sheriff from a possible jail sentence Constance decides to track down von Matthesius herself. The fact that she has no badge and no authority to arrest someone are issues she will worry about later. First she must find the fugitive.

Her search takes her to New York, first to von Matthesius’s brother Felix, who has abandoned his apartment, and finally to the three young men who originally brought charges against the fugitive. Louis Burkhart is terrified; Frederick Shipper doesn’t know where von Matthesius is; and Alfonso Youngman hanged himself the month before. The trail goes cold.

Constance is nothing if not persistent, and she has her fans, a lady reporter and a lady lawyer she meets at the hotel where she stays in New York. She finally catches her man, but the story is not over yet. Von Matthesius is as slippery as a bar of soap and has his own plans.

Constance Kopp is one of the most fascinating characters in recent mystery fiction. The fact that Stewart bases her on a real person and uses real events in her plots make Constance even more fascinating. Her struggle to earn her deputy’s badge is reflective of the many inequalities that faced women during the time.

Lady Cop Makes Trouble is one of the best mystery novels of the year: wonderful and very entertaining characters based on meticulous research, understated humor, and an accurate snapshot of the times just prior to America’s entry in WWI. One could hunt for a downside to Amy Stewart’s series, but it would be a vain search.

Kudos to Amy Stewart and Constance Kopp. May there be many more sequels to follow.