Lady of the Butterflies 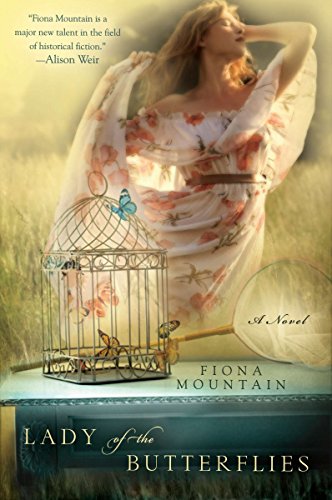 Eleanor Glanville, a pioneering entomologist of the seventeenth century, is the subject of Fiona Mountain’s latest novel, Lady of the Butterflies. The real Eleanor made significant contributions to the study of butterflies, while battling her greedy husband’s attempts to take control of her estates by having her branded a lunatic. The fictional Eleanor is portrayed here as a blue-eyed beauty gifted with a galloping libido and hair like “golden flames.”

Perhaps the real Eleanor would have been pleased. The reader, on the other hand, may heave a weary sigh at the prospect of such a promising premise sagging under the weight of clichés.

The strain shows early. The fictional Miss Eleanor adores her Somerset estate, Tickenham Manor, and all its marshland. She and her “shiny golden ringlets” spend many an hour romping amid this beautiful landscape “as playful and joyful as a butterfly.” Her love for these insects is so strong that, even on a lusty May Day after locking eyes with a country lout, she flees him only to be distracted by—yes—a butterfly, which obligingly flutters to some remote place where said country lout can then assault her in private.

Fear not: Eleanor escapes, with her virtue intact. Which is fortunate, because the flighty heroine needs to be wed, so that a man can take full control of her properties. Here arise several promising conflicts. Her first husband considers draining the land, but faces dangerous local resistance. Her second lover forces her to confront the religious and political fissures that continue to partition the country, as each jockeys for political ascendancy. Unfortunately, these conflicts tend to cycle in and out of the narrative, rather than form an ever-strengthening spine.

The author, whose talent clearly lies in minutely detailed descriptions of the natural world, chooses to hang the story on the hormonal vicissitudes of the heroine’s love life. Thus, Miss Eleanor with her “gold curls bouncing” falls in love with the first man she meets, only to fall more desperately in love with the petulant second one, only to half-fall in love with a perfect third while still feeling guilty about the first and the second—well, you get the picture.

Furthermore, in a story full of lovely detail about the strange beauty of the moors, there’s a grievous lack of attention to simpler matters. A “young blade” whose dissolute reputation has reached the Puritan ears of Somerset in 1664, arrives at the heroine’s house nearly a decade later—only twenty years of age. (Imagine: a libertine at eleven!) In another scene, the heroine dons boy’s clothes before infiltrating an all-male meeting, with no mention of how she hides her two most feminine assets—and she’s a lactating mother.

The much-maligned genre of the historical romance deserves a better example than is offered between the gorgeous covers of this hardcover book. Dozens of finely crafted works are published every month. Seek them, dear reader, among the paperback shelves.