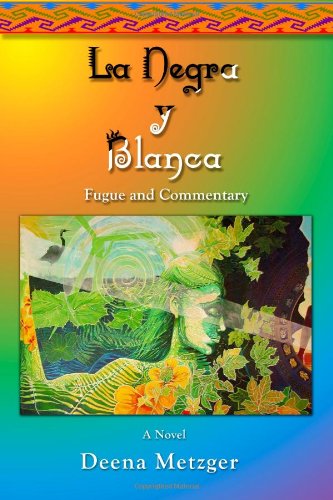 “Among the conventions the author has dissolved include a clear timeline, narrative flow, a single version of events, and revelation of character through action. Some of Ms. Metzger’s characters are so vaguely drawn that they seem to be only reflections in wavering water. . . . And yet, for all its narrative disappointments and its areas of vagueness, this is a lovely book, rich in descriptive language whose rhythm resounds in the ear.”

Though marketed as a novel, La Negra y Blanca: Fugue and Commentary has more of the characteristics of a “fugue and commentary” than of a novel.

Late in the book, the narrator, Blanca, thinks of another character, “[she] invited him into the novel, while knowing she was intending to dissolve all the conventions that would give him ground under his feet.” Among the conventions the author has dissolved include a clear timeline, narrative flow, a single version of events, and revelation of character through action. Some of Ms. Metzger’s characters are so vaguely drawn that they seem to be only reflections in wavering water.

The word “fugue” has two primary dictionary definitions. In psychiatry, it refers to a period of memory loss in which the sufferer often begins a new life. In music, it refers to a polyphonic piece of music with one or several recurring themes that are explored by different instruments, with counterpoint, variation, and a final climax. Both meanings are relevant to La Negra y Blanca, where Blanca struggles with gaps in personal and cultural memory, and where themes of conquest, theft, alienation, sacrifice, and spiritual healing recur again and again.

The message of the book, more important than its plot, is this: the Conquest of Latin America that began in 1492 is a tragedy that continues. Moreover, the ruling race is responsible for the tragedy, from the ongoing torture and murder of indigenous people to the mowing down of mahogany forests and wide-reaching rape of the natural world. The only hope of healing lies in re-connection with what is native and natural. Thus, it is as an act of contrition that the narrator calls herself Blanca, in opposition to the book’s mysterious moral center, La Negra (who is not black but brown, an indigenous woman from Ecuador).

What of plot? La Negra y Blanca is a long speculation on the meaning of encounters in Mexico and Guatemala between the narrator and a handful of characters that represent the “ongoing Conquest.” Blanca, the narrator, casts the book as a mostly one-sided dialogue between herself and her dead friend Victor, a journalist driven to uncover atrocities in his native Guatemala.

Blanca is obsessed by the question of whether she ever met La Negra, the indigenous mistress of a famous writer who was the father of Blanca’s mestizo friend Morena. Whether Blanca ever met the famous writer himself is also uncertain, but over the course of the book Blanca imagines him in detail.

The writer committed three crimes in his life: He impregnated, but did not stay with, an indigenous woman; he allowed his mother to steal their daughter Morena away from her native mother and raise her as a white European; and he captured and displayed five Lacandon Indians for a national festival.

Part of the frustration of the book is that we are told about but not shown these events. Still, Blanca eventually constructs a version of the writer and of his wife, La Senora Sabrina, that satisfies her purposes. La Negra, the writer’s mistress, however, remains elusive. Blanca, in her guise as a visitor from the future, haunts La Negra’s house, hoping somehow to be mothered and inducted into La Negra’s wisdom and grace.

The book is not a quick read. Deena Metzger’s descriptions of objects and the natural world are beautiful, but the lack of narrative tension makes the book easy to put down for a while. Some passages need to be reread and savored. The reader must realize that narrative expectations will not be met—scenes are often interrupted, and mysteries are left unsolved. Any revelation of meaning will be spiritual, not based on narrative twists.

How rewarding readers find this gradual revelation will depend on whether they accept the book’s premises. In La Negra y Blanca, indigenous people are always good, wise, and victimized (except for La Negra, who is only good and wise). Those of mixed blood are tormented by loss and lack of belonging in either world. White people, no matter how honorable their intentions, are constrained by their history of dominance and privilege from entering into authentic relationships with nature or with indigenous people. These are givens.

The most fully realized character is the famous writer, who wants to connect with La Negra but cannot cast off his cultural expectations to do so. As for Blanca’s dear friend Morena, the writer’s daughter, we are told that she is amazing and tragic, but she remains an undeveloped character, vague and needy, receding always into the background. La Negra stands as a mysterious force of nature, graceful and strong but without personal history. Perhaps by depriving us of insight into these characters Ms. Metzger means to demonstrate that there can be no understanding across races, but surely that is an unsatisfactory conclusion.

And yet, for all its narrative disappointments and its areas of vagueness, this is a lovely book, rich in descriptive language whose rhythm resounds in the ear. Ms. Metzger writes not to entertain but in service of spiritual healing, and the reader may find himself, like the narrator, returning again and again to muse on certain images that linger in the mind.