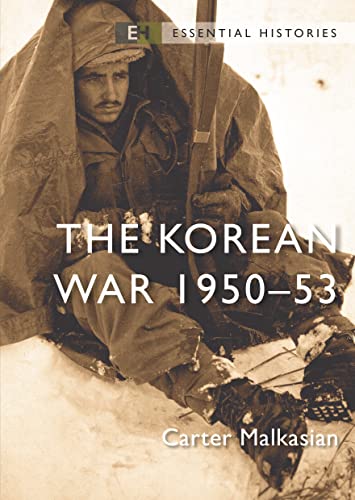 “an excellent introductory volume that definitely lives up to its title as an Essential History for anyone unfamiliar with this conflict.”

Osprey Publishing’s “Essential History” of the Korean War manages to pack a lot of information in less than 150 pages. Written briskly by historian Carter Malkasian, it conveys the essential facts of this conflict without getting bogged down in too much detail, making it an excellent primer for anyone interested in America’s “forgotten” 20th century conflict.

The volume begins by placing the Korean War in the overall context of the early Cold War, noting it was the only conflict of the roughly 50-year struggle between communism and the west where China, the Soviet Union, and the United States engaged in direct combat with each other. Placing the conflict within the beginnings of NATO and the post-World War II struggle for dominance in Asia, the author sets the stage for the North Korean invasion in June 1950.

The description of the actual fighting is covered in just enough detail to give the reader a sense of the up and down operational and tactical movements of the various offensives and counter-offensives while providing the larger strategic adjustment of “winning” a superpower conflict in the nuclear age. The author excellently captures the challenges that World War II American generals faced when they could no longer achieve total victory and had to settle for a war of attrition with the Chinese and North Koreans to bring about a negotiated armistice.

The author does dive into a selected number of tactical actions to give the reader a sense of how these new battles designed to seize key terrain or inflict casualties to further the negotiating position of one side or the other affected the troops caught up in these attritional and seemingly endless tactical skirmishes. These actions are illuminated by well-designed maps and illustrations to give the reader a more intimate view of the soldier’s perspective.

Malkasian also manages to cover other effects of the war, including the growing power of Communist China in Asia, the implications on civil rights in America of the accelerated integration of the armed forces begun by President Truman before the war, and the bolstering of American military and foreign policy efforts both in Europe and Asia to mobilize for the Cold War, particularly the strengthening of NATO and the buildup of the American military from its nadir after the end of World War II.

The rather unsatisfactory armistice that ended the war was brought about not by any military victory, but the sheer exhaustion of all sides after three years of combat, combined with the death of Josef Stalin and the willingness of the Soviet Union to deescalate the war. The Korean War has never been concluded with any formal peace agreement and the armistice is still in effect 70 years later.

A short summary of the long-term effects of the conflict outline how it affected the long-term balance of power in Asia, influenced American military decisions in Asia, including the conflict in Vietnam, and laid the groundwork for the eventual split in the Communist world between China and the Soviet Union.

Overall, this is an excellent introductory volume that definitely lives up to its title as an Essential History for anyone unfamiliar with this conflict.