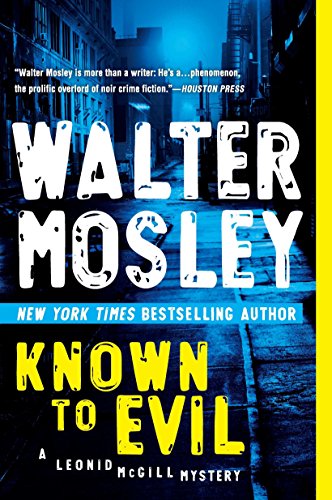 With Known to Evil, Walter Mosley offers the second Leonid McGill mystery. Renowned for his popular Easy Rawlins mysteries and numerous other works, Mosley now moves the setting from Rawlins’s mid-century L.A. to contemporary New York for this new series.

Mosley's charismatic new PI, Leonid McGill, draws in readers with a force as powerful as one of his own ex-boxer punches. McGill is compelling and cerebral; a kick-ass tough guy who cares about his family and can fall deeply and obsessively in love. And although he has a criminal history that keeps the NYPD on his back, McGill is trying to go straight (for the most part).

Yet McGill is still connected to the shadowy figures and settings of underground, criminal New York—people and places that Mosley portrays with chilling clarity.

McGill reveals a lot about himself in this first-person narrative, bringing a magnetic immediacy to his character. For example, he often provides a physical description of himself, usually to show how appearances can be deceiving.

“. . . [W]hen Pete threatened to smash my skull, I smiled . . . Most people who glance at me see a short, bald, overweight black man. Not much of a threat to anyone. But prison had taught Pete to look closer.”
McGill also provides a fascinating running account of his thinking, planning scheming—even his philosophy of detective work. At one point, ironically, he contrasts himself with PIs in mystery novels.

“In gumshoe fiction, the PI gets on the case at about page six and follows it through without pause or distraction from his, or her, personal life.”

Which is certainly not true of McGill’s cases—or of his life.

Known to Evil opens with a domestic scene. The McGills sit at dinner; Katrina, his “beautiful Scandanavian wife” and two of his kids—college students Shelly and Dimitri. There’s even mention of “blue Danube china” and a dinner of “filet mignon and Gorgonzola blue cheese.”

Soon, the third McGill kid enters—the wayward, charismatic Twill, who’s just started a job that he got through his “juvenile offender social worker.”

The reader learns of more cracks in the domestic scene. Katrina and Leonid have been unfaithful for most of their marriage. McGill’s true lover, Aura, has left him. Even more family intrigues and problems are uncovered.

Then the phone rings, reminding enrapt readers that this is a detective story, not a family drama.

The caller is Sam Strange. Alphonse Rinaldo, a powerful. shady figure from City Hall, has a job for McGill, Strange explains. McGill simply has to go to an address to be sure a young woman named Tara Lear is OK. He is not to mention Rinaldo.

McGill arrives at the address to see six cop cars. After talking his way into the crime scene, McGill sees a dead young woman with half her face shot off. And there’s the hit man, himself dead, a knife between his ribs.

The murdered woman is Tara’s friend, Wanda Soa. And Tara is missing. McGill’s job: find Tara, discover why she’s in danger, find out who killed Wanda and the hit man; and all the while keep himself free of suspicion—because the NYPD has a standing order to pull him in for any possible reason.

The case, of course, becomes tangled and complex. But McGill is a smart guy—initially taught about life by his brilliant and self-educated Communist father, who deserted the family to join a South American revolution when Leonid was twelve. Leonid’s substitute father and mentor later becomes his boxing coach, Gordo.

Making life more complicated on the Tara Lear case are “side” problems. Twill has gotten the innocent and naive Dimitri involved with a woman trying to escape a Russian prostitution ring. McGill himself faces eviction from his ill-begotten art deco office. And the PI tries to fix things for Ray Sharkey, whose life McGill completely ruined in his own criminal days. And Gordo is dying of cancer. (Remember, McGill is not like the “fiction” gumshoe, who can take on a case “without pause or distraction from his, or her, personal life.”)

For example, there’s the character of McGill’s techno-geek (a common role in mysteries these days), Tiny “Bug” Bateman:

“Bug considered himself part of a historically based infrastructural movement that he called techno-Anarchism.
. . . .
“If there existed an Oxford Pictionary, its entry of “butterball” would have been Bug Bateman. . . . At twenty-nine, he sat in a chair surrounded by computers all day every day, probably all night every night.”

A sidekick from McGill’s shady past is “Hush.” And, remember, this is one of the story’s good guys.

“I was always a little uncomfortable around Hush—maybe more than a little. He knew a thousand ways to kill a man and dozens of techniques to make a body disappear. He was the classic cold-blooded killer who seemed to the world to have no heart or conscience.

“Outside of his wife, I was the only person to know his true name and his professional history.”

“I didn’t want to be involved with killing, if at all possible. Hush knew this, but he was also a psychopathic killer, by nature and by trade—even if he was retired.”

Hush, needless to say, does use his old skills to help out McGill.

And Mosley expertly describes dark, labyrinthine locales, such as an illegal interrogation (and sometimes torture) room hidden deep in the maze of underground New York. (The “body” mentioned is unconscious, not dead.)

“The address I was given was near the Brooklyn Naval Yards. The directions led me down an alley on a street of abandoned warehouses. I drove down the narrow lane, used the first of three keys on an outer door and the second one on a two man elevator. I dragged ______’s body into the lift and traveled three floors down to a hallway that ended in a maroon metal door. This led to two concrete rooms that were connected by a door and a jury-rigged monitor and camera that allowed a man in one room to watch what happened in the other. The second of these rooms had an aluminum chair that was bolted to the floor replete with manacles and leg irons, also bolted down for the prisoner’s hands and feet.”

Then there’s one situation in which McGill makes the absolute coolest, cleverest escape from a deadly trap. And, of course, McGill continues to provide wise commentary on the ways of the world, as well as great dialogue.

But as the reader becomes engaged in the character of McGill and engrossed in the myriad of twists to this mystery, some flaws appear.

The reader might begin to feel that McGill always knows the exact right guy at the right time and the right place to work things out. Maybe that flaw comes from all the perfectly drawn characters, settings, and situations—there may be just a few too many of both for the sake of credibility and clarity.

And late the book, one of the main characters suddenly reveals much of the explanation behind the mystery in a hypothetical “what if” fashion. Then, not long after, another main character unravels more in a lengthy monologue. Some readers might be left less than satisfied with that manner of plot development.

Finally, the conclusion becomes perhaps a little too pat, too easy, lacking the powerful impact of the rest of the book—the concluding punch to the gut that readers might be used to.

The answer to one crucial part of the mystery is even “We’ll never know now.”

But to quote McGill, from earlier in the story:

“That was another thing about mystery novels: at the end of the story the crime is solved and that’s that. The crook is caught, or maybe just found out. But regardless, the crime is never carried on to the next book in the series. You rarely find the stalwart and self-possessed dick looking for a perpetrator from the previous story.

“I wasn’t so lucky. The crimes I dealt with lagged on for years, sometimes decades.”

There is excellence in Known to Evil—the usual Mosley excellence; but with perhaps a less-than-excellent conclusion. Read Known to Evil and see what you think.