The Knowledge: A Richard Jury Mystery 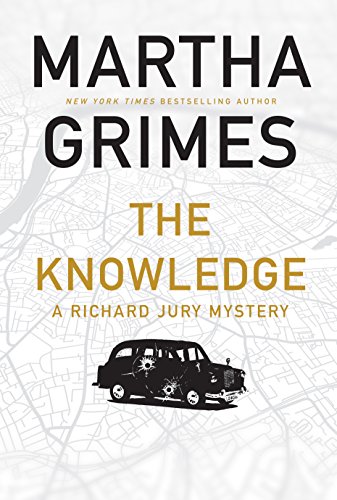 “a tale of how a single decision can change a life—or end it forever.”

On All Hallows’ Eve, Detective Inspector Richard Jury meets David Moffit at Starrland, his friend Andrew Starr’s shop. They hit it off immediately. David is a physics professor from Columbia University, charming, handsome, brilliant, and retaining a child-like wonder about the universe immediately striking a corresponding chord in Jury. David’s wife, Rebecca, is beautiful, ethereal, and equally intelligent, the perfect mate for such a man. Jury has dinner with them, they talk, and they part.

The next night, David and Rebecca are gunned down in front of The Artemis, an exclusive casino where only 50 patrons a night are admitted by exclusive invitation. The gunman calmly appropriates their cab and drives around London for several hours then boards a plane for Africa.

The driver of the cab enlists the aid of The Waterloo Kids, a group of street children who’ve decided to “assist” the police. One of them, a canny ten year old named Patty Haigh, wangles her way into the killer’s company, and is now on that flight to Africa with him.

In the ensuing investigation, Jury learns that David was addicted to gambling, but winning or losing didn’t matter, though he won more than he lost. He also seemed to have some kind of system because he’d been barred from casinos in Atlantic City.

Because the murders happened at The Artemis, Jury wonders if its charismatic owner, Leonard Zane, is involved. Zane has holdings in Africa, importing quantities of tanzanite, a precious mineral rapidly being depleting. Can he be smuggling tanzanite? He also holds exclusive sales rights to a certain African artist’s work. Is art fraud involved?

How would either of those crimes be tied to an American physicist who liked to gamble?

The more Jury delves, the more complicated the case becomes. Rebecca’s mother doesn’t seem to care that her daughter and son-in-law have been inexplicably murdered, while David’s devastated parent is informed of the deaths by transatlantic phone call. The murderer may or may not be a well-known Kenyan police officer. Where is Patty Haigh?

There’s also report of a shooting in another casino in Reno, also owned by Zane. Coincidence? Jury doesn’t believe in those.

Jury is about to be taken on a very circuitous route to an answer, ranging from Atlantic City, N.J. through London, to Kenya, and back again before he finds his killer and the motive.

Perhaps a little more entertaining than other Richard Jury novels because it leaves England and dwells briefly in Africa and the States, this novel is also most poignant in its telling. The tale takes its time in the twists and turns of discovering the perpetrator. Red herrings abound, throwing police and reader off the track until everything meshes.

The Knowledge of the title is, of course, the name of a pub, kept secret and only frequented by cab drivers. (NOTE: The final mention is a hoot!) In the usual cast of characters, though Patty Haigh is intriguing, the most winning is the victim himself. David Moffitt only appears in roughly 20 pages at the beginning of the story, though his presence is felt throughout. Ms. Grimes’ descriptions of him and his wife make them stay in the memory, pointing out their loss as much to the reader as to Jury. Indeed, these two would’ve been wonderful characters to add to the Det. Inspector’s pantheon of friends.

The episode in Africa seems a bit extraneous, wandering along as does Patty Haigh, not in any hurry to bring her coincidental meeting with Melrose Plant to fruition, while Plant, ostensibly sent to the Dark Continent by Jury, also seems in no haste to reach his destination. Jury’s time out to play Cupid in an abortive attempt to combust a spark between Plant and lady-friend Vivian also seems superfluous in the midst of the case’s resolution.

Three things the reader may wonder about, for they are never fully explained:

Why was Plant sent to Africa?

Why did David ask Jury to deliver the gift he’d bought his mother?

Why did he tell his mother there was a gibbous moon, a sign of misfortune?

“Why had he said it? Did he know he was walking into danger?”

This is a novel the reader won’t simply finish and forget. There’s a poignancy to it in the waste of a brilliant life to the cruelty of obsession. Jury’s question, as he looks up at the stars through the glass roof of David’s tree house is a fitting summary of his feelings: “Damn it, David, why did you have to come to London? Why couldn’t you just have stayed in the good old USA?”

The Knowledge takes a tortuous and complicated path to its surprising conclusion in a tale of how a single decision can change a life—or end it forever.