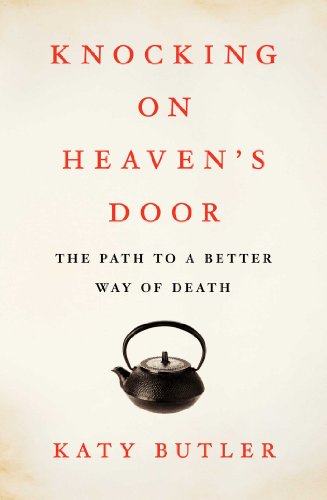 “. . . a pitch-perfect call for health care changes in the mechanized deaths many suffer in America.”

Katy Butler’s memoir of her father’s long walk to his eternal home accompanied by her mother’s shortly thereafter doesn’t gloss over the ugly parts of declining health and care-giving resentments.

But unbeknown to the reader she slips in some actual science factoids to make you think and feel about the issue. This isn’t just a two-hanky story but a pitch-perfect call for health care changes in the mechanized deaths many suffer in America.

Ms. Butler makes us wonder if we would want that extra three years of fecal incontinence because of a long-life battery installed in a heart pacemaker. Medicare may pay for this service, but more and more Americans are questioning the efficacy of this and other methods of mechanized death.

Ms. Butler concisely shows how the health care system has gotten it wrong by illustrating how her father’s primary care doctor’s recommendations were repeatedly ignored—even when the specialist wanted procedures outside cardiology treatment guidelines. The suffering of her parents after her father’s stroke reveals the march of acute care and a health care system always keening for a technological answer instead of the provision of care. Read her chapter The Tyranny of Hope for the perfect soliloquy to the United States health care approach and the results.

For those wishing to research this area further, Ms. Butler provides a handy reference to a U.S. Government Accountability Office study from 2012, which declares wide variations in the fees hospitals paid for the cardiac devices. Hospitals are also required to sign confidentiality agreements not to reveal what they pay for these devices, which brings price fixing to mind.

A cast iron stomach is needed at times when Ms. Butler reports on early 1950 practices to invent what is known as the field of cardiology today. One patient, equipped with the then cutting-edge external pacemaker, basically a continuous defibrillator, merely shut off the device, choosing death instead. This was an era before fully informed consent was mandated so many of these human guinea pigs would not have agreed to the procedures if they had full knowledge of the suffering.

From these early days the cardiac device industry went on to its halcyon era of 48% profits, which have since been matured to a steady 20% annually. Ms. Butler cites a British medical journal Lancet’s study on hospital facilities, where only two percent of beds in Britain are designated for intensive care, as compared to 11% of those in the United States—and this disparity is driven in no small measure by robust Medicare payments for cardiac procedures.

Ms. Butler’s memoir does a great service to all families dealing with the decline in health of a loved one by showing the psychological, physiological, and financial costs of the illness on the caregivers. The chapter The Sorcerer's Apprentice reveals how difficult it is to get clinical staff to adhere to advanced medical directives. And in The Business of Lifesaving she reveals how profits and Medicare reimbursement policies collide with treatment practices.

Knocking on Heaven’s Door shows how the patient is ignored much of the time in the pantheon of American health care. An elderly woman whose ribs were broken while receiving CPR is quoted telling the attending nurse, “I will hate you till the day I die, you took away my chance to go to heaven, and on top of that you hurt me.”

The question is: When will she be allowed to die?