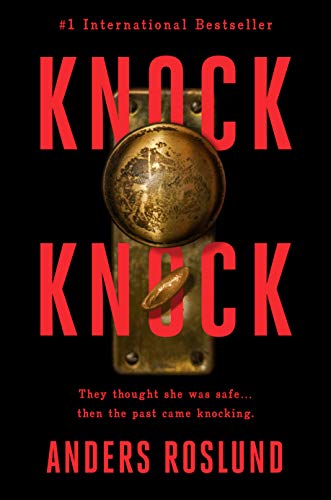 “Only a reader skilled in picking out details will guess this story’s finish.”

Seventeen years ago, Criminal Inspector Ewert Grens of the Stockholm PD took a little girl from the home where her entire family had been murdered. He remains with her until she is placed in witness protection and adopted by someone unaware of her history.

This year, someone broke into the house where the crimes took place but they took nothing.

“In case of any report regarding Dala Steet 74, regardless of the classification of the crime, contact Detective Inspect Ewert Grens immediately.”

Grens is summarily notified, and it doesn’t take long for him to reason that someone has discovered the child survived the murders and is trying to discover her whereabouts.

Someone took documents out of the guarded police archives and realized there was a witness, and now they will complete their murder of the entire family by finding her.

The life of that now-grown child is in danger.

Grens sets out to discover the child’s whereabouts and prevent her death. If he isn’t too late.

In a Stockholm suburb, Piet Hoffman discovers his youngest son playing with something deadly . . . “a hand grenade. Transformed into a toy.”

It was in the mailbox, addressed to young Rasmus Hoffman but the box contains a message also.

“He fished it out, carefully, and read the sentence, which contained only five short words: We know who you are.”

Piet had been an undercover infiltrator for the Stockholm PD, becoming a part of the Polish mafia. Now, he’s a legitimate businessman, retired from any time of police work. Someone, however, has learned his identity and is threatening his family, unless he does one last job for them.

“It could be anybody, with any voice.

It was supposed to be the most powerful machine gun ever built. But when it was finally ready to go into production, there were no buyers. Production stopped before it started.”

Someone in the Stockholm PD has stolen his confidential records from the Stockholm PD; in them was an idea Piet had as an infiltrator: how to knock out a criminal organization and in a single move completely change the balance of power in Stockholm’s underworld.

Now they are going to force Piet to make it happen, using the FN BRG-15..

Piet has been given a choice—and he chooses not to choose. He won’t carry out the mission. Instead, he contacts Ewert Grens.

Grens has now found the foster parents of that orphaned child, but not the girl herself. He learns that as she entered her teens, the girl began to remember that terrible day and she wants to know exactly who she is. Then, she disappears.

Now here is Piet Hoffman, asking for his help, and something he says makes him think the two cases may be related, somehow.

“The organization threatening me has contacts reaching deep inside the police station.”

Who is stealing confidential files from the archives, and how does it relate to the supposedly nonexistent weapon and a 17-year-old murder?

With a story stretching from Stockholm to Montenegro and back, this is definitely a tense and detailed thriller, giving some interesting highlights into Swedish policework and their use of undercover agents.

Dividing the story into two points-of-view (Grens’ search for the child; Piets preparations to protect his family), the story has a far-reaching capacity as the background of the murder seventeen years before gradually meshes with the current situation.

With realistic dialogue conveying the love Piet has for his family, and the responsibility Grens still feels for the child he took from the murder scene that day, the narrative also conveys the pressure both men are under as the clock ticks down to the deadline Piet has been given and the police turncoat’s identity remains undiscovered.

Though not overly violent, the ending is a twist and a shocker, and only a reader skilled in picking out details will guess this story’s finish. The last three sentences resonate with sad and shocking irony.

As part of a writing duo, Anders Roslund has written seven novels featuring Grens and Hoffman. Knock Knock is his first solo novel about the pair.

Readers will no doubt ensure it is the first of many.