The Knights of the Golden Circle in Texas: How a Secret Society Shaped a State 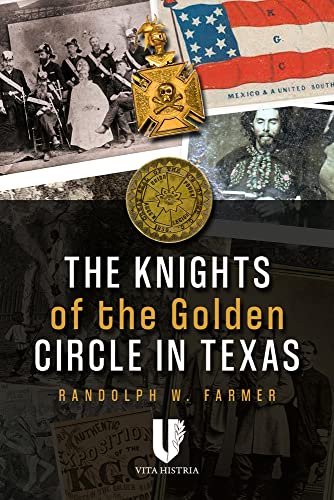 Human history is replete with secret societies and organizations like the Knights Templar and Freemasons. When it comes to the United States, the same holds true, especially in the 19th century and particularly in the South. This publication concerns one of the more obscure (to the layman) in our history, the Knights of the Golden Circle or K.G.C.

Indeed, Randolph W. Farmer, the author of two previous books on Texas history, maintains that this group is at least partly, if not directly, responsible for the Democratic Party split prior to the presidential campaign and election of 1860, the resulting secession crisis of early 1861 and certainly so in Texas, our country’s southwestern frontier at the time.

Following Texas’ admission to the Union, the K.G.C. was established in the mid-1850s, during a period of filibustering attempts at forming and enlarging a so-called slave empire encompassing the South, American Southwest, Mexico, Cuba. Many early founders and members were already veterans of the Texas fight for independence and the Mexican-American War. In the meantime, it also came to dominate two other previously established secret societies in Texas.

With the diffusion of slavery on their mind, they were more than willing to remain as part of the Union unless and until their “property” rights were threatened, at which point they would be just as willing, if and when the time came, to divest themselves of their link to the United States and go their own way.

According to the author, the K.G.C. leaders deliberately employed a strategy to divide the Democratic Party in 1860 and then walk out of the party’s convention, a move which virtually ensured that Abraham Lincoln would win in the presidential campaign. The advent of the election of a Black Republican would confirm the perceived threat to slavery and ultimately justify secession.

As far as Texas was concerned, the organization paved the way for eventual secession through intimidation of Unionists, extensive member recruiting and constant agitation surrounding the question of what to do about the Native American “problem” on the frontier, an obfuscation which was meant to obtain arms and train future citizen soldiers who would defend the state from without.

Eventually, the K.G.C. got its way, led Texas out of the Union and into ultimate defeat as part of the Confederate States of America where many of its leading members were prominent Confederate military figures, public officials, and political figures. Consequently, the organization lost much of its strength and credibility over the remaining years of the 19th century. The end of slavery with the passage of the 13th Amendment certainly didn’t help, either.

That being said, this publication is one of strengths and weaknesses. On the one hand, it is extensively researched, if the notes are any indication, and well-written yet rather suffers from information overload. That overload also only tends to lend itself mostly to those who have an interest in the subject at hand. Additionally, it makes for a slow and tough read with the plethora of names, dates, places and other details.

Furthermore, and this is to be expected when the topic is secret societies, there is considerable speculation in the text on who was actually a member inasmuch as these organizations tend not to maintain membership rolls, at least not for public consumption. As a result, the author was forced to employ “likely,” “possible,” ”probable,” and other descriptions when discussing K.G.C. membership.

Finally, there is no index but should be considering the previously referenced names, dates, places, etc. nor is there a formal bibliography. Consequently, one must rely on the published source information provided in the notes. To his credit, the author has employed a wide variety of sources, many of which would be otherwise obscure, inaccessible, unavailable, or unfamiliar to most.

The photographic section is helpful and informative and contains contemporary illustrations, portraits of prominent members, documents, K.G.C. badges, and other membership devices for further context.

Inasmuch as the author has concentrated on the history of K.G.C. activities specifically in the state of Texas, one can search online and find multiple other publications on the overall subject of the organization for those so topically inclined.

United States history has many stories that remain to be told. It is gratifying that authors and historians continue to dig for them for our edification.