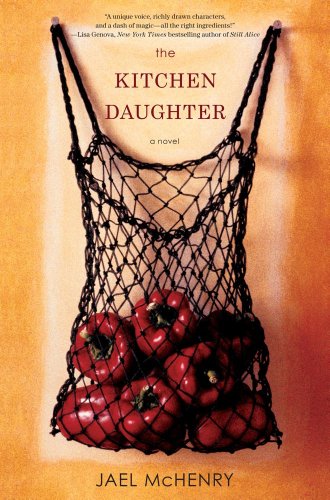 The deliciousness that wafts from the pages of The Kitchen Daughter will make readers wonder how the author managed to concoct a story of magic, food, and Asperger’s syndrome, but as with any good storyteller, Jael McHenry has a gift—as does her protagonist, Ginny Selvaggio, who has Asperger’s syndrome and the power to conjure the dead with her cooking.

Ginny has always been protected and sheltered by her parents. After their sudden death, she is suddenly on her own and seeks comfort in her family kitchen where the act of chopping and dicing and stirring soothes her anxieties.

“I lose myself in food. The rich, wet texture of melting chocolate. The way good aged goat cheese coats your tongue. The silky feel of pasta dough when it’s been pressed and rested just enough. How the scent of onion changes, over an hour, from raw to mellow to sharp to sweet and all that even without tasting.”

Ginny accidentally calls upon her Italian grandmother’s ghost while making the woman’s ribollita soup. Nonna turns up in acid washed jeans and a sweater, sitting in Ginny’s kitchen and before she goes, she warns her granddaughter, “Do not let her,” before vanishing like a batch of fresh baked cookies.

This isn’t a ghost story, but Ginny does find that she has a talent to bring people who have died into her kitchen buy preparing the recipe that they have written in their own handwriting. This talent is not something she wants to share with her pragmatic and bossy sister Amanda, who is dealing with her parents’ death in a completely different matter.

Her dominating sister insists on selling their parents house and having Ginny live with her, even though Ginny prefers staying in the home she’s always known.

As Ginny struggles with expressing her feelings to her sister, she discovers secret family photos and letters hidden in her home. Wishing to find answers to her questions, she continues cooking, finding recipes from her mother and father which enable her to speak with them. What they tell her in the very short time they spend with her in the kitchen, teaches Ginny more about herself than she had ever thought possible. Through other characters such as the housekeeper Gert and her son David, Ginny learns that “normal” isn’t always normal, it’s different for everyone.

“I want them to bite into a cookie, and think of me, and smile. Food is love. Food has power. I knew it in my mind, but now I know it in my heart.”

The Kitchen Daughter has original recipes sprinkled throughout the pages along with a pinch of enchantment and a dash of sparkle. If you’re starving for a good book to read, you can’t go wrong with Ms. McHenry’s delicious first novel.