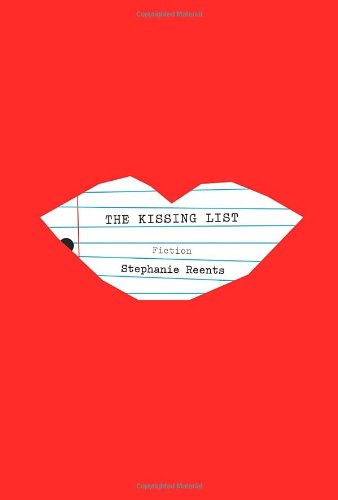 Like the television series, “Girls,” but more literary and highbrow, Ms. Reents’ stories explore the lives of twenty-something women who are trying to figure out how to navigate independence, relationships, and careers.

Most of the stories are first-person narratives, many related by Sylvie, an Oxford graduate currently living in New York City, who is linked to many of the other characters in the story collection.

All of the stories in The Kissing List are well constructed and clever, but the first few stories lack the depth of most of the other tales in the collection. The first story, “Kissing,” narrated by Sylvie, introduces many of the themes and characters developed in successive stories; it is light and engaging but somewhat shallow.

Some of the writing and plotting of the earlier stories in the collection feel too contrived. For instance, in the stories ”Roommates” and “Temporary” the main characters’ interactions consist primarily of witty banter in perfectly constructed sentences. In the story “Temporary,” Vita, the main character, is talking to her friend Mel:

Vita realizes she is fiddling with her zipper. “And I’d get paid for this?”
“You’d get compensated.”
“Compensated? You really know how to wrangle with the English language.”
“Oy. Conjunction, junction, what’s your function?” Mel sings in her high little-girl’s voice. “Hooking up words and phrases and clauses.”

The story “Roommates,” related by Sylvie, also includes a bit too much airy but clever repartee and lacks poignancy and depth for a narrative about a friend and roommate who has cancer.

However, The Kissing List also includes many beautifully written, intense, interesting stories such as “None of the Above,” “Games,” “Memo,” “This is Just to Say,” “Animal Cruelty,” and “Awesome.”

In particular, the stories “None of the Above,” “Memo,” and “This is Just to Say” experiment with innovative structure and form. The tale “None of The Above” is narrated by a young woman who writes standardized tests.

Sections of her narrative are in the form of standardized test questions and problems that relate to her own life. She explains, “Grief has made me a misplaced modifier, a fragment, a _______ that is missing its subject . . .”

“Memo,” which is related by Sylvie’s friend Anna, is structured like an office memo written to her ex-fiance Philip. Her narrative analyzes and recounts in lists, timelines, and even footnotes how their relationship developed and fell apart. Despite the memo-like form, the story isn’t flat, superficial, or unemotional. In fact, Anna’s “Memo” functions as a sort of catharsis and means to greater self-awareness, a disturbing look at a problematic relationship. She relates:

This is where I’m supposed to synthesize the information I’ve presented and chart a course forward.
In conclusion, we didn’t get married because I was afraid I didn’t really know you.

The stories “Games” and “This is Just to Say” are also particularly insightful in their depictions of friendships among women and relationships with men. Both stories conclude with important realizations by their respective narrators.

The Kissing List beautifully captures the lives of twenty-something, smart, educated women. Some of the stories are funny and light but many are also haunting and thought-provoking.