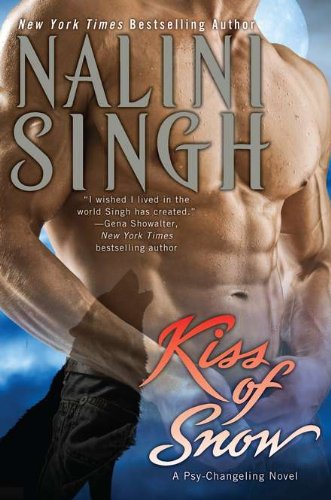 Nalini Singh’s Kiss of Snow, her most highly anticipated novel yet, will satisfy readers, but probably not in the way they expect.

Hawke is the leader of the SnowDancer clan, the beating heart of the pack, the glue that holds them all together. He took on the responsibility as a young teenager, and his drive, compassion, and power took what might have been fractured irrevocably and made it strong. So strong, in fact, that he and his wolves are challenging the status quo. But though he celebrates the matings of his lieutenants, recognises that bonded pairs make for a healthy pack, he takes no chances with his own heart. The wolf only recognises its mate once, and Hawke’s mate died when she was still a little girl. So Hawke finds solace in his leadership, and the comfort of his friends, but remains destined to be a lone wolf.

Sienna does not expect to live much longer. Her power is one of destruction, of those around her and, eventually, herself. When she dropped out of the Psy net, along with her remaining family, she was already aware of her use-by date. She worries only about the effect her death will have on her family—and the damage she can wrought on those around her when she goes. Though only 19, she has lived through enough pain and suffering to warrant three lifetimes. But it all seems to pale in comparison to the pain she feels now, knowing Hawke is attracted to her, but knowing they can never be together.

The romance between Sienna and Hawke has been building for a long time, over a period of most of the books in Ms. Singh’s Psy/Changeling series, and readers have been anticipating the book where they both find their happy ending. And it’s very satisfying. The love story itself is a pretty standard “we can’t be together for **** reasons,” that comes into play in many romance novels (after all, if all couples could be together immediately at the beginning of the novel, there wouldn’t be much point in reading it!), but Ms. Singh has a real talent for building depth and emotional turmoil without delving too much into angst. And the reasons for keeping Sienna and Hawke apart are legitimate. Sienna is very young. Hawke’s one mate did die. Add to that the fear of impending war and Sienna’s fear of her growing power and really, from the outside, it seems like a very good idea to avoid a happy ending in this case.

Of course, then it wouldn’t be a romance novel. The romance is well played, with Sienna showing her emotional age, even as she’s impressing with her maturity, and Hawke fighting a battle that everyone knows he’s losing, even if he won’t admit it to himself. And, of course, Singh knows her way around a sex scene, and the passionate nature of their romance reiterates the intensity of the characters themselves.

It’s not necessarily the romance that makes this book work. It hasn’t only been Sienna and Hawke’s romance that’s been building through recent books. One of the reasons Ms. Singh’s Psy/Changeling series has gone so long without falling into any of the regular traps is that Ms. Singh always writes two stories—one about a couple, and one about her world. In the early novels, it’s very easy for a new reader to pick up any novel and enjoy the story without needing to have read the previous novels. This has changed in the most recent novels as the world story has grown, revealing treacherous terrain. Rather than rest on the unique nature of her races, Ms. Singh has been teasing readers with a suspense subplot within her paranormal subplot, and Kiss of Snow is where it all starts coming to a head. Things that have been building behind the scenes come to fruition. What was hinted at in early novels suddenly becomes vital.

This is the part where readers might find themselves with unmet expectations: Kiss of Snow isn’t really about Hawke and Sienna. It’s about war. And the book feels like Ms. Singh alters her series, shifting the focus more firmly onto the world story, and away from the romance story. Hawke and Sienna’s happy ending is there, but it’s not the happy ending readers will be wanting when they read towards the climax of the novel. Ms. Singh has taken her paranormal romance series to the border of urban fantasyland. She has often said she knows exactly how the series is going to end, and this book feels like it’s been crafted with that end in mind, as if we’re reaching the top of a hill in a roller coaster, and we’re about to start the rush of that downhill slide. It all gets very exciting.

There are a few quibbles. Readers do not want to start with this novel—even longtime readers may want to brush up on the previous characters as they’re all named—often—with very little explanation. Alternately, don’t read it on an e-book device, as it’s very difficult to flip back and forth between the novel and the helpful cast of characters included at the beginning. The revelation of Sienna’s Psy designation also feels a little tacked on, with elements not mentioned before suddenly thrown in to make it work. These are minor, but they are there.

Nalini Singh’s Kiss of Snow was always going to be a tricky novel to execute. This far into a series, readers feel an ownership, as if they know the characters, and Hawke and Sienna have been beloved from almost the beginning. But by shifting the focus, playing their romance against the screen of a much larger story, Ms. Singh pulls off a masterpiece of misdirection. The characters get their happy ending, but readers get so much more.