KISS FAQ: All That's Left to Know About the Hottest Band in the Land 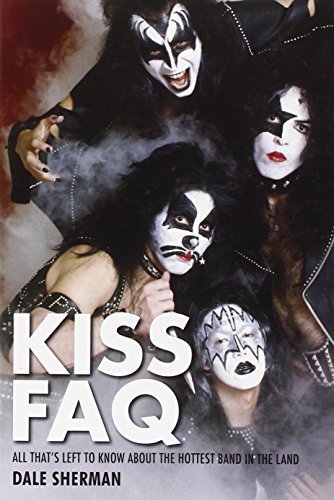 Yet another book about the explosive rock group KISS might seem like a well mined topic to the average music fan, but to members of the devoutly loyal KISS Army—which the band’s legion of supporters named themselves back in 1975—there can never be too many.

The latest paperback to add to your hard rock library, KISS FAQ: All That’s Left to Know About the Hottest Band in the Land, comes from longtime KISS fan and expert historian Dale Sherman, who has authored two well-received books on the group since 1997 (it’s also the most recent installment of Backbeat’s FAQ series, which boasts titles devoted to Led Zeppelin, the Beatles, and Black Sabbath, among others).

While other KISS books ranging from former employee tell-alls to autobiographies by the band members themselves (bassist/vocalist Gene Simmons and ex-lead guitarist Ace Frehley penned New York Times bestelling memoirs, and former drummer Peter Criss has his own slated for Fall 2012) might strive for a broader rock audience, they often wind up as required reading for mostly hardcore fans due to the relatively niche subject matter.

But with KISS FAQ, Mr. Sherman shouts out loud in the title that his book is for diehards only.

For those fans—whose numbers are stronger than one might think—that title immediately piques our interest. After all, what else is there left to know about a band worshipped and revered by their fan base for almost 40 years and simultaneously loathed by others?

Turns out, a lot . . . depending on how much platform heels and kabuki makeup are your thing. With over 356 pages and 31 chapters, certain sections provide legitimately new information for even the most knowledgeable followers, while other chapters come off as well researched pieces of fairly familiar KISStory (though to be fair, 95% of the book would still provide new information to the casual fan).

Mr. Sherman’s strong suit is certainly his vast understanding of the band’s complex history—even if the timeline is a bit random—as well as his clear presentation of the context of and reasons for certain events.

The shining moments of KISS FAQ are the opinion-based chapters in which KISS fans (and actually, many hard rock fans in general) will find themselves jumping into the conversation, intrigued from start to finish.

Chapter topics such as which album covers were the best (and worst), which concerts were most pivotal to the group’s career, as well as the possible meanings of certain song lyrics—all are subjects that card carrying members of the KISS Army have felt strongly about for years and continue to debate.

Mr. Sherman’s take in identifying many of the band’s career turning points and discussing why or why not they were defining moments for the group are fascinating. Of course, it’s precisely this approach which one wishes was developed a bit further here, since KISS fans are always looking for other like-minded souls to discuss the highs, lows, and in-betweens of their favorite group.

For example, why a long chapter focused on one of KISS’ greatest misfires— the 1978 NBC TV movie KISS Meets the Phantom of the Park—is viewed from a somewhat stale standpoint and feels like a missed opportunity. Mr. Sherman’s occasional sense of humor does work well, but considering how ridiculous that film really is—and the guilty pleasure it has become over the years—you can bet that diehard KISS nuts would willingly dive in to more information.

The same could be said of the band’s love-it-or-hate-it 1981 concept album (Music From) The Elder; while the author discusses it with accurate and objective detail, something this polarizing in KISS world could have been treated with more originality.

To the author’s credit, the amount of minutia within some chapters is mind boggling, but at times may challenge even the most passionate fan’s attention span.

Instead of painstakingly describing each concert tour stage design or costumes literally codpiece by codpiece (even the ones belonging to the non-makeup years, which were far less visually exciting), why not cut straight to the chase and list the suggested best and worst tours, whip up something like dream set lists and call it a day?

The bottom line is, most KISS fans already know the facts, but give ’em something to really deliberate into the wee hours of the morning at a local KISS convention and they’re a happy bunch.

Casual fans will enjoy learning how the original four band members joined forces in 1973, as well as the often overlooked musical histories of 80s-era replacement members such as Eric Carr and Vinnie Vincent, not to mention chapters on Gene Simmons’ well-documented infatuation with groupies, Paul Stanley’s surprising list of producing/songwriting credits, and the legendary merchandise that has made KISS as much of a brand as they are a band. All this and more is kicked off with a genuine and heartfelt foreword by KISS Army cofounder Bill Starkey.

For a band whose likeness has appeared on everything from trash cans to action figures to condoms and even coffins (!), it’s amazing that something as simple as a book still elicits the amount of excitement, wonder, and nostalgia among their worldwide following that it does . . . which in the end is why KISS FAQ succeeds on many levels.

Jon Rubin is a NY-based musician, television producer, and full-time lover of all things rock ’n’ roll—and yes, a proud KISS fan since preschool. He founded and published one of the first KISS fanzines in the early 1980s and has met and conducted interviews with many of the band members past and present. He has also run the popular KISS collectibles website www.kissrocks.net since 1997.