The King's Assassin: The Secret Plot to Murder King James I 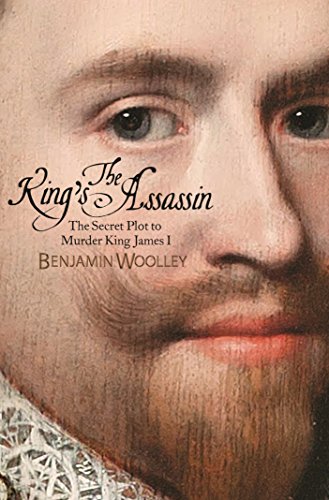 At the time of his death in 1625, at age 55, James I of England had been already ill with several maladies of the time, but rumors immediately surfaced that he had been poisoned by George Villiers, who for a decade had been known to be his intimate political advisor and/or his ambitious lover. The gossip spread through the royal court and in the streets of London. An investigation was immediately launched by parliament, but Villiers was never charged, and he even continued to be a royal favorite to James son and heir to the throne Charles I. Villiers died in 1628, at age 35, assassinated by an army officer.

The King’s Assassin is acclaimed British author Benjamin Woolley’s account of James’ relationship with Villiers, a fragmented history of his reign. Ostensibly a work of nonfiction, the book clips along with a glut of subplots and fevered court intrigues, for better and worse, that detract from the main story. Indeed, this is the stuff that sweaty historical novels are made of.

Even though James was always known to have sex with men, officially criminalized and culturally taboo, same sex relations were tolerated, and he was popular. Commoners could look the other way as long as he did his duties for the crown, married, and produced heirs. Villiers’ political career started when he was officially dubbed by James “the gentleman of the royal bedchamber,” soon to be bestowed with the peerage title of Duke of Buckingham, eventually becoming Lord of the Admiralty and advisor not only to James, but also to Charles, Prince of Wales. Villiers was Charles’ Foreign Minister to Spain to arrange the prince’s marriage to Maria Infanta.

Villiers was pushed to garner influence at court by a politically ambitious mother, who aggressively sought to improve her family’s fortunes and diminished social standing. At age 21, George was basically paraded in front of James at a royal hunt, and sure enough caught the eye of the king. Before long Villiers replaced James’ favorite advisor Robert Carr, who ironically initially championed George to steer James’ eye away from a rival.

George didn’t stay the royal boytoy for long, and he became a close confidant and representative of the king’s interests, tangling with such powerful politicos as Sir Francis Bacon, Sir Robert Cecil, not to mention foreign ambassadors and even Cardinal Richelieu—all whom constantly curried favor with the king and eventually deferred to Villiers.

Woolley is particularly good at condensing a lot of geopolitical history. That sense of historical reporting and economy would have helped in other sections of the book that dive into too much detail about political marriages, endless rivalries among relatives, and constant philandering among the royals, interesting enough, but one would like a more concrete picture of James’ reign.

Woolley delves into in the glut of intrigues at James’ court, personal and political, and focuses more on the lives and schemes of a rogue’s gallery of ambitious royals, aristocrats, social climbers, and pimped out relatives. Much of it is fascinating, but chunks of it strike as filler.

Also it is quite a throwback to get to casual references to sodomites and pederasts and Woolley’s period decorated language. Clever decoding of lines like “Vassals licked the pavement with their slavish knees.”  Or “To his peers, he was still the king’s catamite.” He even includes a number of popular street limericks with rhymes about James canoodling with his George, which give a peek into the commonality of same-sex sex relations. But largely this is a missed opportunity about sexual mores and fluidity of the era, which of course was officially criminalized on pain of death.

Meanwhile, James I remains a vaporous figure in the book, on endless royal excursions from one titled estate to the next all over England, for his endless amusement. Little about the fact that he commissioned the most famous protestant version of The Bible. Was able to establish a pacifist approach to diplomacy, politically and religiously, was savvier about the affairs of state than acknowledged at the time.

Before Woolley gets to the squirrelly forensic evidence (and lack of) to support the claims that Villiers poisoned James I, the pace of the book is a bit heavy going. So, however lively and bawdy the subplots are The King’s Assassin is a mixed bag of some boggy history of not so merry England.