A Kingdom of Tender Colors 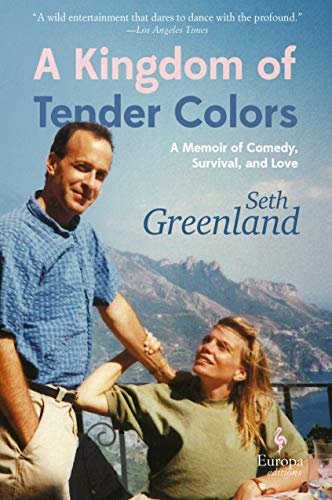 “Illness is nothing if not a narrative: the present isn’t what the past was supposed to lead up to, and the future holds God only knows what. Yet here is the funny side of cancer.”

“Laugh it off” is not the attitude one typically strikes when facing cancer. Yet this is the frame of mind that Seth Greenland, an award–winning playwright, screenwriter, and novelist, chooses in a memoir that probes his relationship with an aggressive lymphoma that struck him two decades earlier at age 37.

All memoir is about the self now reflecting on the self then. And illness is nothing if not a narrative: the present isn’t what the past was supposed to lead up to, and the future holds God only knows what. “Romantic ideas of what was to come contrast with what actually transpired,” he says at the end.

But Greenland doesn’t venture there at first. He admits to years of struggle before he could finally bring himself to explore the subject. But then most writers will tell you that any emotionally laden material needs to sit untouched in a drawer for a while before the author can tackle it honestly and with perspective.

And so, Greenland tells us, he is exploring “The funny side of cancer.” Why this choice he never exactly says given that his course of illness certainly contains plenty of setbacks and harrowing turns. His humor—and sarcasm—are moreover unrelenting. It’s one joke after another, an interminable standup routine in which the punchline repeatedly is “it tends to recur.”

Not far past the opening pages the reader feels he uses humor as a psychological defense, and that what he is defending against is a cauldron of unexpressed anxiety. He considers the Buddhist afterlife, but decides it is, “like the gourmet cheeseburger, an irresolvable paradox.” Later, “Thinking about the afterlife, unless someone is paying you, is a waste of precious time.”

He uses the metaphor of his father’s library to observe that books allow “access to the inner lives of its occupants.” But we don’t get far into his own inner thoughts despite the promise “to finally consider what happened,” and put the experience “in some kind of perspective.”

His childhood was “ham on Wonder Bread” and the “Good Humor truck.” Yet his is “a cancer family” in which multiple relatives are stricken. Close friends die. Even the dog gets cancer and the next–door Riverside Memorial Chapel is a “never–ending parade of dead people.” His mother prepared him and his siblings for her own early death, framing a family group photograph and giving each of them a copy.

For years afterward Greenland enjoyed a successful screenwriting career, a happy marriage, a growing family. And then, during a routine doctor visit: swollen glands, blood tests, scans, and finally a biopsy that steers the arc of his narrative into The Twilight Zone.

Greenland decides to save his own life but is indiscriminate about what advice he takes, settling on a “health regimen” that includes Chinese medicine, red meat diets, meditation, “lymph brushing,” vitamins, enzymes, and coffee enemas. He gives no pat answers or soaring paeans to optimism or inspiration. His is ultimately a story of resiliency in navigating unexpected shoals and triumphing, but not before he drops the humor (“As a party trick, I take thirty pills at once”) and comes to terms with the luck that’s befallen him.

The screenwriter reminds us that “movies are about illusion. There is no greater illusion than the belief that we are not going to die.” After name dropping celebrities and doyennes of Studio 54, household names now long deceased, he marvels that he managed to survive all that. “When I am stuck in traffic or find myself in a quandary . . . I can usually step back and appreciate that I’m here to experience it in the first place.”

His unorthodox regimen continues for a year. And then another. And then five years pass. The 25 pounds he lost comes back. So does his hair. His scripts sell, as do his novels. Even his students get published. Content with success now, he still remembers after 25 years of remission that “traditional medicine assured me it would come back.” He wonders still, “Why was there no recurrence?”