A Kingdom for a Stage (Shadow Players Trilogy) 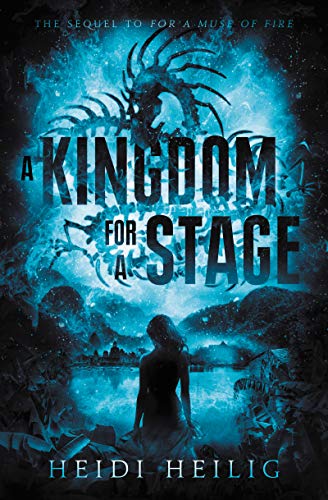 Jetta Chantray, necromancer, remains on the run from the army and rebels, all who seek the power of her blood. Her remaining family consists of her (un)dead brother and her necromancer biological father, who has very, very big plans for her.

She is a prisoner of everyone, it seems, but most directly of armée engineer Theodora, who forces Jetta to ensoul flying machines so the armée can better attack the rebels. The rebels want Jetta for her necromancy as well, and after a daring escape, Jetta is once again conscripted into service.

What Jetta really wants is for the war to end and her land to return to peace. But there are too many factions, too much intrigue, and everyone seems to want Jetta on their side, willing or not.

Delightfully morally gray in places, especially for a YA book, A Kingdom for a Stage follows the journey of outlaw Jetta as she tries to find a place in a torn kingdom. Her delightful blood magic expands in this second book in the series, giving us not only her revived brother, but a massive dragon spirit (among many others).

Jetta’s struggle among warring factions, the pull between her demonic biological father and loyalty to her real father, the guilt over the trapped soul of her brother, and a budding romance give this book as much power as Jetta’s blood. The pacing is superb, and the emotions sharpened to a fine point. Jetta is the kind of flawed, determined protagonist that drives the YA category, and A Kingdom for a Stage is a rare example of how robust and magical YA can be.

Like all of Heilig’s work, the book is deeply inclusive. It draws not only from France and Southeast Asia, but the main character, Jetta, shares the same mental illness diagnosis as the author.

“There is a long silence, and despair is a lengthening shadow. I have never challenged a hallucination before. Is the lack of response evidence that I could no longer fool myself? But then, at last. Akra speaks again. ‘Do you often hear voices, Jetta?’

“’Only sometimes.’ The admission is difficult—new between us. I can almost feel his surprise, like it has a texture in the air. After all, my malheur had only gotten worse once he’d left to join the armée.”

There are an array of queer characters as well, but none as robust as Cameron:

“My eyes widen—I cannot imagine Le Trépas showing mercy. But half the stories I’d heard about him must have come from the armée. Were they only more propaganda? ‘Did he tell you why?’

“Cameron stares at the fort, his voice soft. ‘I always imagined it was because I was about the same age as Miss Theodora. Besides, Legarde saw me as a girl. And the Aquitans don’t think a woman can rule a country. I wasn’t a threat like the rest of my brothers.’”

As with For a Muse of Fire, A Kingdom for a Stage tells the story not just in first-person narrative, but with play scripts, letters, and songs. The writing is lush and descriptive, as with all Heilig’s works:

“We are drenched daily with sweat or rain. Every morning, we check our boots for centipedes; at night, we pull leeches from the backs of our legs and try to sleep to the symphony of croaking frogs. But there is a comfort in returning to the jungle. I have missed the smell of the mud and the greenery, the soft quality of the humid air, the vibrant feeling of living things just out of sight.”

Enchating, sweet, harrowing, and bold, A Kingdom for a Stage is a brilliant second book in Heilig’s Shadow Players trilogy. Fans of For a Muse of Fire will not be disappointed, and readers of Heilig’s earlier works such as The Ship Beyond Time will find this book a slightly darker, but just as engaging, read.