King Thrushbeard by the Brothers Grimm 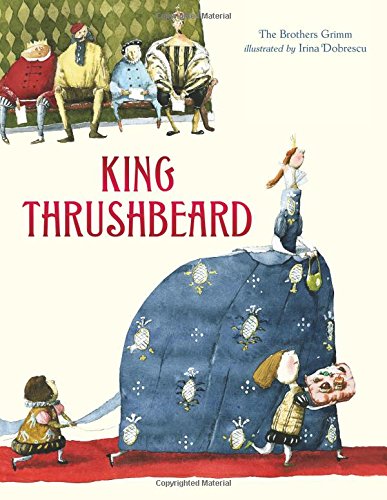 With their rich symbolism; pleasing repetition of words, phrases and themes; and their stark revelation of human fears and fantasies, the vibrant folktales collected and edited by the Brothers Grimm still enrapture a modern audience. Yet despite a throng of recent films and novels inspired by the strange old stories, only a relatively few of the brothers’ 200 or so folktales are readily available for a young audience so attracted to the genre.

NorthSouth’s latest picture-book edition of a Grimm Brothers’ folktale demonstrates the mesmerizing potential of even a relatively minor story when placed in the hands of a gifted artist. Romanian illustrator Irina Dobrescu has created fresh, humorous, stylized paintings that highlight the story’s message that we should not dismiss others solely on the basis of appearances.

Beginning with the end papers, Dobrescu shows us a princess adored and spoiled by her father. We see a potpourri of telling images: the king cradling his baby girl, wrapped in a pink blanket embroidered with roses . . . the two splashing in the waves, their royal garb flung in the sand . . . a wide-faced portrait of the little princess behind her own stick-figured portrait of father and daughter holding hands . . . and lastly, a portrait of the snooty adult princess, her nose turned up with contempt for others.

Then in the grand old style of traditional fairy tales, the narrative unfolds. The princess was “so proud and haughty withal that no suitor was good enough for her. She sent away one after another, and ridiculed them as well.”

The illustrator helps the reader focus not on the princess’s beauty (in fact, she resembles one of Maira Kalman’s pointy-nosed urchins) but on her bratty lack of empathy. While the princess mocks each man, “she made herself especially merry over a good king who stood quite high up in the row, and whose chin had grown a little crooked.” Scorning this suitor, she claims his chin resembles a thrush’s beak. It will, of course, be up to King Thrushbeard, as he came to be called, to teach her the importance of kindness.

The disgusted old king then swears she will marry the very first beggar who arrives next. That turns out to be a ragged fiddler, who carries off his bride and her many bright, stuffed suitcases.

As they make their way toward his home, the princess admires a lovely forest and then a grand town. When she asks her husband to whom each of these belongs, he answers: “It belongs to King Thrushbeard; if you had taken him, it would have been yours.” To which she replies: “Ah, unhappy girl that I am, if I had but taken King Thrushbeard!”

After they arrive at the bridegroom’s little hut, she is dismayed to discover she must cook and clean up after herself, as there are no servants. And soon, she experiences hard luck and worse.

Perhaps some young observant readers will notice the “fiddler” has a suspiciously exaggerated chin and will delight in having discovered that the man the princess wishes she’d married and the one she did wed are indeed the same. Those who are surprised at the plot twist will no doubt want to turn back the pages to uncover the clues the illustrator has offered to suggest the husband’s true identity.

The joyous concluding double-page illustration, with its wild assortment of creatures and brightly arrayed guests, puts a flourishing touch on this constructive and entertaining treatment of a potentially troubling tale. While NorthSouth offers no information on the translation used, the publisher deserves praise for continuing to publish elegantly told fairy tales, illustrated by such exceptional artists.