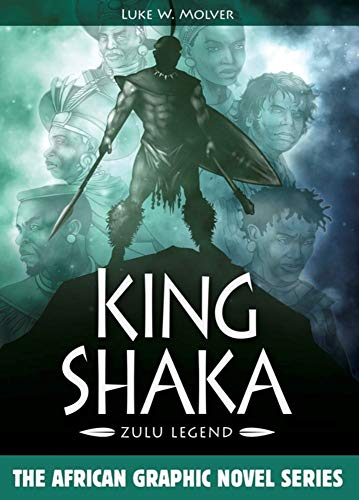 In King Shaka, Zulu Legend, by Luke W. Molver, Shaka Zulu rises to the throne after wrestling a turbulent and oft-times violent kingdom from his brother. Protective by nature, he hopes to be a good, strong and progressive leader, but danger is everywhere. His biological brothers seek to overthrow him and rule in his place. His powerful aunt who is known as “The King Maker” is petitioned daily to withdraw her allegiance and give it to another more strategic ruler. As if these things aren’t bad enough, dangerous whites land on the continent, and Shaka must decide whether to end their lives or allow them to thrive among their people.

All of these events unfold in the first few pages of the book. And as readers turn pages and become deeper immersed in the culture of Africa and the Zulu people, there is the constant feel of danger and unpredictability all around.

Young messengers attempt to warn Shaka of a rogue band of warriors with blood-red shields who are plundering villages, but Shaka’s advisors tell him these warnings are like children’s fairy tales. Instead of listening and at least investigating the claims, Shaka focuses on solidifying alliances he considers important, and he fails to help the people on the outskirts of his kingdom. They in turn become outlaws without homes, and they set out to dishonor Shaka.

Facing dangers both within his circle and without, Shaka Zulu is truly a ruler living on borrowed time.

This is a bright, brilliant, dark, and turbulent story of a warrior who clawed his way to the throne, held it for a time, and then lost it to some of his own trusted men. Although the names and villages are often unpronounceable, and the customs sometimes seem incomprehensible, Shaka Zulu’s world is not so different from that time in early America when the people had a “wild, wild west” mentality; when shooting, squatting, plundering, and murder were everyday occurrences.

Author Luke W. Molver’s prose teeters between face-paced and frantic, and the vocabulary he uses is definitely best suited for young adults of ages 12 to 18. Because he uses many African words that may leave a cloud hanging over the reader’s head as he or she struggles to understand their meaning, he wisely includes a detailed glossary at the end.

Molver is also the illustrator of this amazing work. The deep and rich colors, the fierce and focused faces, the chaotic chronology of Shaka’s rise (and eventual fall), and the bloodstains in the sand make this a most memorable story.

This book is the second in The African Graphic Novel Series; the first was called Shaka Rising. Although it would be beneficial to read the first book, this one can certainly stand on its own. Use this book as a study in graphic novel structure and composition. It may also be used as a first-hand example of African life, as a slice of world history, or as supplemental reading for those who are curious about the rise and fall of great leaders.