King of the Comics: One Hundred Years of King Features Syndicate (The Library of American Comics) 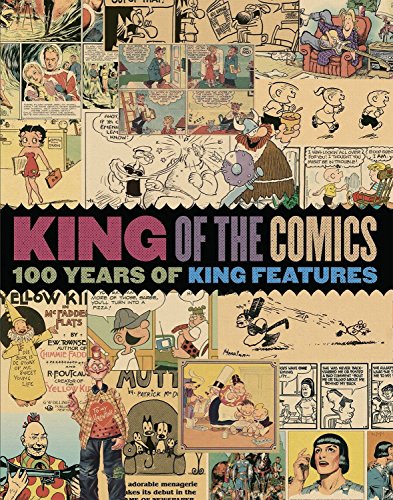 Even a partial list of newspaper strips represented by King Features Syndicate over the years is mind blowing. Almost every title on this list is a household name!

The history of King Features actually plays out 20 years earlier than the title suggests. William Randolph Hearst knew what helped sell newspapers and at the top of his list was a good comic strip. That’s why he put money into a brand new, high-speed, multi-color press. It is also why he spent good money to hire artist Richard Outcault away from his biggest competitor, Joseph Pulitzer.

On October 18, 1896 an eight-page color supplement, The American Humorist, debuted as a supplement to the Sunday Journal.  In a city that was growing past two million residents, the paper sold 375,000 copies.

Gracing the cover was a full color comic featuring The Yellow Kid, who had been helping Pulitzer sell papers for a year. Even with a two cent increase in price, the Sunday Journal was a massive hit. New York went crazy for the color supplement and especially for the comics they featured.

That first page from October 1896 is just one of hundreds of comic pages beautifully reproduced in King of the Comics: One Hundred Years of King Features Syndicate.

In addition to the strips themselves, the history also features rare and seldom seen art used in marketing the strips as well as other photos and other promotional memorabilia. Toys, song sheets, and media from stage shows based on strips are also showcased. Some strips are represented by the original art created for a Sunday or a daily page.

The popularity of The Yellow Kid helped establish the format for a comic strip in the mind of the public. McFadden’s Row of Flats, the strip he appeared in, used speech balloons, sequential panels and, most importantly, recurring characters.

It took a few years, but eventually almost every strip was working from this now recognizable template. Hearst liked continuing characters and soon The Katzenjammer Kids, and in 1900, Happy Hooligan were making both the country laugh.

Mutt and Jeff debuted in The San Francisco Chronicle in 1907. Hearst signed their creator Bud Fisher in 1909. Artist Jimmy Swinnerton was on staff for Hearst out in San Francisco but moved to NYC and began creating new strips. His Jimmy (later Little Jimmy), one of the earliest strips featuring a boy who somehow always managed to get in trouble, appeared in 1904 and lasted until 1958.

In 1915 the publisher brought all of his syndication offices under one roof, forming King Features Syndicate as a separate company in the process. As long as he published newspapers, Hearst never took his eye off of the comic page. He kept his eye out for good strips or artists and wasn’t shy about making suggestions.

The most famous example being Krazy Kat. Generally considered to be among the top three strips ever created, it was never among the most popular of strips. Every once in a while a manager would suggest cancelation; however, Hearst loved it and George Herriman’s Kat and Ignatz stayed in his papers for years.

King of the Comics: One Hundred Years of King Features Syndicate combines a historian’s love of the art form with a fan’s love of the strips themselves. Essays written by Jared Gardner, and others provide a valuable guide to artists, writers and their families across the decades.

Popular strips such as Bringing Up Father, Popeye, Barney Google and Spark Plug or The Lone Ranger are familiar to almost everyone. But it is the hidden gems, the long forgotten strips and artists that are found throughout the collection that will grab and even inspire you.

Nell Brinkley’s art work from the early twenties on The Book of Magic and The American Weekly is sensual, dreamlike and serene. Skippy may be about a kid and all the trouble he can get into. But as drawn by Percy Crosby, the hyperkinetic world of a child becomes poetry in motion.

When Polly and Her Pals debuted she was just one of many comic strips based on flappers such as Dumb Dora or Blondie. In time, artist Cliff Sterrett would bring the artistic movement Modernism out of museums and into newsprint.

The thirties see the rise of the adventure strips such as Flash Gordon or Secret Agent X-9. When Milton Caniff left Terry and the Pirates to come to King Features in 1947 and create Steve Canyon it was such big news that the artist made the cover of Time.

By the fifties the family takes center stage with strips like Hi and Lois. Stan Drake’s art on The Heart of Juliet Jones elevated soap operas to levels that the genre had never seen before.

The books closes with the 20th century’s beacon of existential absurdity, Bill Griffith’s Zippy. A smiling goofball with an eager grin, his presence on a newspaper page takes everything straight back to 1896 and the Yellow Kid. The history of King Features is the rough history of the American newspaper strip.