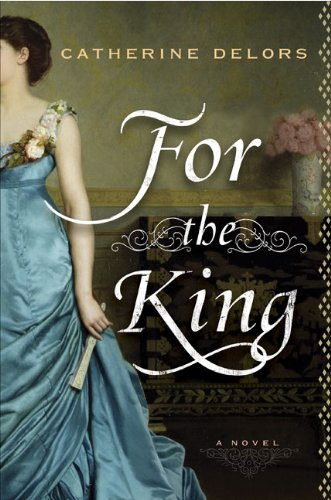 If a sign of a well-crafted historical novel is when you rise up from the pages, startled by a sound, to discover it’s not the clatter of horses’ hooves that interrupted you—but rather the irritating buzz of your cell phone—then lose yourself in For the King, Catherine Delors’ second historical novel.

On Christmas Eve 1800, Napoleon narrowly escapes an assassination attempt when, on the way to the opera, his entourage encounters a cart full of gunpowder that explodes in a narrow street. Roch Miquel, Chief Inspector of Paris, sets out to investigate the blast and deliver the culprits to justice.

Paris in 1800 is in the midst of a fragile peace, but two groups threaten it—the Chouans, royalists from the west who Napoleon would like to believe are pacified, and the Jacobins, hard-line revolutionaries who suspect Napoleon’s ambitions. Roch, a former rag-and-bone man, follows the evidence and swiftly concludes that the Chouans are behind the crime, but his conclusions are called into question because Roch’s own father is a Jacobin. When the ambitious Minister of Police arrests Roch’s father, Roch finds himself under a deadline to arrest the Chouans or see his father climb the steps of the guillotine.

Based on a real assassination attempt, the story closely follows much of the investigation documented in the archives of the Ministry and Prefecture of Police in Paris. A number of the characters—including the assassins—are historical, a fact this reader did not discover until the author’s notes at the end of the book, which shows how deftly Ms. Delors has woven the real and the imagined. Through the construct of the criminal inquiry, the author navigates in clear detail the bureaucracy involved in the three different Paris police units, and reveals turn-of-the century investigative techniques that don’t include DNA, fingerprinting, or surveillance cameras, but rather horseshoes and handwriting analysis. All this, in a richly depicted nineteenth century Paris.

Though it’s true that the author won’t win an Edgar for the mystery in this story—she reveals the identity of one of the conspirators far too early—as a historical novel, For the King is so steeped in the era that it reads like a book written not two hundred years after the events, but as a contemporary work of fiction. Written, perhaps, by a very astute observer, lolling in a bistro on the Rue Nicaise, sipping café au lait as the carriages clatter by.