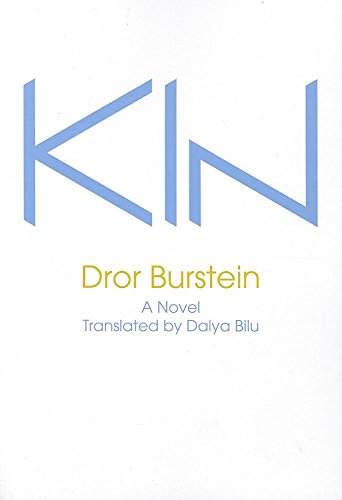 “Kin will leave readers hoping more of Mr. Burstein’s books will be translated and published in English.”

Dror Burstein’s novel Kin is a sad and beautiful portrait of the inner life of a widower and adoptive father in his seventies.

Sensing his mortality, Yoel seeks to find his adult son’s biological parents (without the son’s knowledge or consent) and reunite him with them. Using spare, minimalist prose its narrative is conveyed via a nonlinear impressionistic series of vignettes, flashbacks, inner monologues and apocalyptic dystopian fantasies/dream sequences of varying lengths; the shorter ones can stand alone as prose poems.

Taken together these disparate passages do contain a coherent narrative, but some mental assembly is required on the part of the reader. As such, Kin is especially recommended to readers of postmodern and experimental literature—or those who simply enjoy strong, psychologically sensitive writing.

The novel’s characters include the adoptive parents, Yoel and Leah, an upper-middle class Ashkenazi couple who are in their thirties when they adopt; their son Emile; his nameless, working class North African Sephardi biological parents who are sixteen when Emile is born and whose given names are referred to as [ ] and [ ]; Dror, a classmate of Emile’s and a narrator (Emile, Dror the character, and Dror Burstein the author were all born in 1970); and the city of Tel-Aviv, also a character.

Emile’s skin is noticeably darker than his adoptive parents’, a combination that in 1970 was unusual in Israel in contrast to the 21st century United States where intermarriage as well as interethnic and overseas adoption has become fairly common. American readers will compare and contrast their own concepts of kinship with the Israeli one portrayed in Kin.

Yoel and Leah recall to young Emile how they chose him instead of a less attractive child at the orphanage. We later learn that their first choice had been a girl who it turned out was the daughter of one of the nurses and thus unavailable, and in a rushed decision they picked Emile instead.

When Emile is six, Leah dies in an elevator accident. Yoel at first wonders how he will raise Emile, but he rises to the challenge and proves to be a good enough single parent.

Emile becomes an apparently normal adolescent, though Yoel has to bail him out of jail once or twice, and in high school he has a girlfriend. At age 18 he acquires the form to request the identity of his biological parents but declines to submit it.

On the other hand, three days after he is drafted into the army he is discharged as “unfit for military service” much to Yoel’s relief, but as an adult he is able to hold a job and live independently. Emile is a 38-year-old bachelor when Yoel begins looking for his son’s biological parents—the same age according to rabbinic commentators the biblical patriarch Isaac was when God commanded Abraham to sacrifice him.

Yoel’s grief decades after losing Leah is excessive in its duration and intensity, perhaps because the demands of parenthood did not allow him to mourn adequately when she died. He replaces their queen-sized bed with a single one, deciding to remain alone though still open to casual sex.

But even in casual encounters he desires a partner with character and personality traits no less attractive than her physical attributes. On his one successful attempt to pick up a woman she turns out to be selfish, self-focused, and mean spirited (though not to him).

From these unattractive traits readers might infer an anachronistic, sexist, and sex-negative assumption that only an emotionally unhealthy woman would agree to no strings attached sex perhaps reflecting the author’s religious upbringing. Were Yoel not still mourning Leah he probably should have kept looking; for decades Tel Aviv has had three single women for every two single men and an active bar scene.

Yoel’s love for Leah is mixed with feelings of anger and abandonment. The descriptions of his grief are moving, but it is surprising that none of his friends, relatives, or colleagues recommended grief counseling or other psychotherapy in the absence of which the extent of his suffering seems unnecessary.

In his professional life Yoel designs highway exits, entrances, and bridge overpasses. Readers may wonder whether and where he fits on the autism spectrum. His scientific curiosity leads his imagination to apocalyptic dream sequences such as envisioning the end of life on earth when our sun turns into a Red Giant a couple of billion years from now.

Dalya Bilu’s English translation is quite good, almost as good as Mr. Burstein’s original Hebrew. Readers whose Hebrew is not quite fluent and have time on their hands as well as a good dictionary will find the narrative sections of the Hebrew version of Kin fairly straight forward but the prose poem like fantasies more challenging. Both versions of Kin are illustrated with childlike drawings and handwritten Hebrew phases and sentences, which Ms. Bilu translates in captions.

Mr. Burstein has written three other novels as well as poetry and plays. This edition of Kin will leave readers hoping more of Mr. Burstein’s books will be translated and published in English.