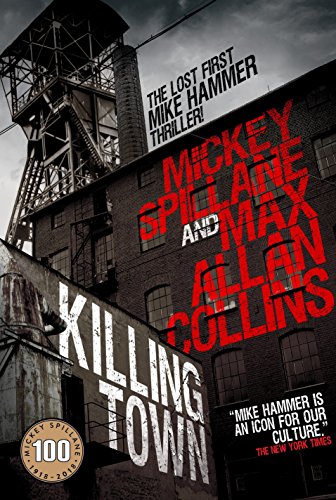 “This is the novel that started it all.”

It’s the late 1940s. Mike Hammer has come to Killington, Rhode Island, to keep a promise to a friend.

His buddy, Bob Loomis, is dead, killed during a robbery. Mike’s on his way to take the loot to the young woman who doesn’t yet know she’s a widow. Bob’s partners in crime are in pursuit, but Mike soon has other things to worry about.

The inhabitants of Killington don’t exactly love the place.

“Killington? More like Killing Town. It’ll kill your dreams deader than a mackerel.”

It doesn’t take long for Mike to learn why.

No sooner has he settled in then he’s arrested and thrown into jail, where a couple of overzealous cops indulge in some interrogation with fists and other assorted pain-evoking items. The charge? Since this is long before anyone heard of mirandizing, it takes a while before they remember to tell him.

“A detective stood beside me, a couple of hundred pounds of potatoes in a cheap suit, swinging a leather-covered billy into the palm of his hand like a cop walking a beat.

Only right now, I was his beat.”

Mike finally learns he’s being charged with rape and murder, and it’s a foregone conclusion that the trial is going to be very short and not so sweet, with him on a one-way trip to nowhere.

Then, something short of a miracle happens. The daughter of the wealthiest man in town, the man whose business keeps Killington alive, gives Mike an alibi, and all he has to do in return is marry her. Even if Melba Charles is beautiful and rich, Mike manages to keep a ring off her finger, at least long enough to determine either her father or her brother is mixed up in the murder. It just may take him a little longer to discover which one. Or maybe they both are.

Just a boy and his dad, having some quality time together.

Between dodging crooked cops, investigating the Charleses, falling for Melba’s charms, and dodging the hoods from out of town, there’s still that money to deliver to Bob Loomis’ widow.

This is the novel that started it all, though it wasn’t the first novel published about Mike Hammer, and has lain in obscurity, waiting for Max Allan Collins to resurrect and complete it in time for the 100th anniversary of Mickey Spillane’s birth.

Indeed, this one is so very violent in spots, especially the ending, in which Hammer again dispenses his own brand of justice, with an ironic one-liner giving the reader chills, that had it been completed and submitted before now, it’s doubtful the hardboiled detective might ever have seen print at all.

As it is, the story is pure Hammer, and definitely not p.c., a little rougher around the edges than the later versions, because he’s younger, brasher, and just starting out on his journey. Mike’s cruel as needed, but he can also be gentle, keeping that side hidden for those special occasions when he lets his guard down briefly. Otherwise, it’s that very familiar bone-jarring violence, nonstop action, and hard-boiled sarcastic ripostes.

The other characters are precursors of those becoming typical in later Hammer novels. There’s the good-bad girl, teasing and enticing, getting what she wants, but never all of what she wants from the man with a mindset of vengeance. The assortment of men, one or all of whom could easily be the villain, are smooth, slick, and too confident for their own good. Lurking somewhere in the background is Pat Chambers, worrying about, and trying to cover for, his friend while keeping it all legal.

Included is the usual brutality and acts that we nowadays hope wouldn’t be allowed or ignored. The veteran Mike Hammer reader will accept them as part of the game. A newcomer may blanch a bit or, inured to the current violence both in life, onscreen, and in print, merely take it in stride.

All in all, it’s a vicarious thrill ride down Memory Lane, back to a time when justice and mercy were a lot less easy to come by and more arbitrary.

Killing Town is best viewed with the attitude of the time in which it was written, and to see it with the eyes of a reader from the year it should’ve been published. That way, the thrill will be better, for even with its controversial sex and violence, Mike Hammer is an icon and his adventures, once read, stay with the reader ever afterward.

Killing Town, the first, but published as the latest, is evidence of that.