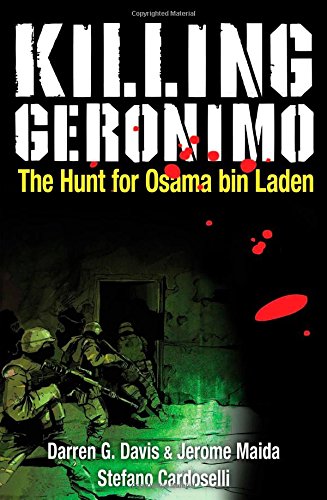 “Killing Geronimo is the best a graphic novel gets.”

This is a tale we all think we know. But like so much of reality, the truth is much deeper and the truth is much scarier. As revealed in Killing Geronimo: The Hunt for Osama bin Laden, we knew little of what actually went on at the time.

This isn’t just an old western tale in which the posse chases the rustler into the hills of Wyoming. It is a complex and decades-spanning narrative jumping from the Russian War with Afghanistan, to the offices of the CIA, and over to the dark, dank caves of Pakistan.

Writers Darren G. Davis and Jerome Maida deftly juggle multiple scenarios and never once leave the reader scratching their head wondering where they are. They are aided by artist Stefano Cardoselli who perfectly captures every horror from a machine gun fight with snipers in desert hills desert to the details of water boarding.

Colorist Bill Key creates an innovative and unusual approach to narrative inside a graphic novel. Instead of the usual individually colored panels showing action and dialogue, he chooses to use a dominant color scheme for each faction represented in the story, deeply enhancing the drama at the heart of the chase.
The method also underscores the idea that this is a battle between distinct and highly individualistic sides.

When American troops are engaged or active, green dominates the page or panel. This gives the impression of seeing the action through night vision goggles. While the Cardoselli’s lines are still very clear and the faces of the troops and their commanders are distinct, the color scheme gives the impression that the ground troops are always feeling around in the dark. As dedicated and engaged as the troops are they are still operating in a vacuum of uncertainty.

As we read about bin Laden, his minions, and their actions, the page bleeds red. As the narration recounts their actions, the boldness of the red drives home the point that they started this and, regardless of their own justification or reasoning, their actions lead to the murder of thousands of innocent people.

Finally the color blue highlights the actions of the U.S. Government at its highest level. This is where Killing Geronimo really comes together.

The approach of the two presidents is as important as the actions of the ground troops. The writers remind us that early on Bush spoke eloquently and realistically about the events of September 11 and the hunt for bin Laden. As time went on he dealt with the situation realistically but somehow the media and public perception reduced his efforts to clichés and late-night talk show jokes.

The impression created is that Bush was hampered by ineffective help from his advisors. The CIA appears to be throwing money at competing warlords in Pakistan and Afghanistan while often ignoring the opinions of those on the ground and in the middle of the action.

During one very tense and terrifying encounter, several American troops may be as close as 500 yards from a cave where bin Laden may be hiding. But they are ordered away from the action with little explanation or reasoning.

Obama takes a different approach. When the capture of bin Laden starts to become a reality he listens patiently to all possible ideas. Gathering his highest advisors in one place, he reviews with them each possible option.

The insight into the decision making process is as thrilling and suspenseful as the actions of those on the ground. The patience exhibited by Obama is extraordinary. In the end, it is Obama and Obama alone who makes the call to invade bin Laden’s compound.

For all the technology that is part of the story—high-tech helicopters, President Obama and his advisors watching a live television feed of the compound where bin Laden is believed to be hiding—it is the human effort that comes through the most.

Despite having radar and incredibly high-tech helicopters, the pilots flying the mission must still rely on their own individual skills as they hug the ground and follow the terrain during their approach. All the technology becomes meaningless while these expert pilots ultimately rely solely on training and experience.

A shootout in the hills of Afghanistan involving trapped snipers and the troops supporting them will have readers on the edge of their seats. From the standpoint of comic history Killing Geronimo is as exciting as anything ever written by Joe Kubert for Sgt. Rock and Easy Company.

Unlike the distance of time and generations that separates us from WWII, the action in the hunt for bin Laden involves our brothers and sisters and our children. Being so close to it personally, it hits home on every nerve.

Everything written is documented and backed up by a bibliography at the end. It is the final chilling note to what we are reading. To think all this happened while most of us were at Wal-Mart, sitting in bars, or daydreaming at work brings the bravery and determination of the American soldiers and our leaders even closer to us.

From the neverending action provided by the story itself, to the narrative and artistic decisions made by the creators of this book, Killing Geronimo is the best a graphic novel gets.