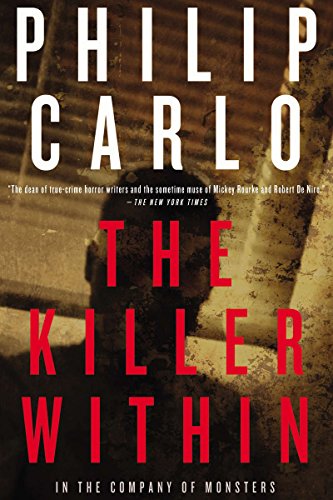 Philip Carlo is no stranger to violence and death.

He grew up in Brooklyn where he had a first-hand look at bullies, assorted tough guys, and Mafia members. He witnessed beatings and extortions, and like many inner-city kids, he became involved with drugs and gangs. That gang affiliation nearly cost him his life. He was shot in the head during a gang fight when he was only 15 years old. Whether surviving that incident gave him a penchant for writing about death and those who cause it, we will never know.

What we do know is that Mr. Carlo “walks the walk, not just talks the talk,” which enables him to write true stories that many may find too frightening to read. The Killer Within is a memoir, and after reading the book and preparing to write this review, I did what I always do: I researched the author and his other works. I Googled Philip Carlo and went to his website, where I was saddened to learn of his recent death. He passed on November 8, 2010, at the age of 61, succumbing to ALS, also known as Lou Gehrig’s disease. This insidious affliction, for which there is no treatment or cure, was Mr. Carlo’s “killer within.”

In an ironic twist of fate, it was not the demonic murderers he freely associated with that took his life, but rather a silent, life draining disease that slowly incapacitates each muscle in the body, until finally taking away the victim’s ability to breathe. It’s a slow death, one that tortures its prey on a daily basis, stealing bits of life in tiny increments, until all systems become entangled in its vicious grip. The real terror of Lou Gehrig’s is that the victim’s mind is not affected, thus the person becomes an observer watching his own demise.

Despite this hardship, Mr. Carlo endured and did not allow ALS to impede his career. His wonderful loving wife, Laura, tended to his needs, while his faithful assistant, Kelsey, wrote the words that he spoke. Unable to grasp a pen, he depended on her to facilitate his passion to write. The trio’s ability to work as a team allowed Mr. Carlo to continue on his writing journey.

His quest for finding the truth never weakened—even as his body did. He remained upbeat and enjoyed life, particularly his love of ethnic food. He loved traveling to South Beach to write during the harsh New York winters. His story includes his many friends from all over the world, people he met while researching his novels: Stolen Flower, Predators & Prayers, The Ice Man: Confessions of a Mafia Contract Killer, The Nighstalker: The Life and Crimes of Richard Ramirez, Gaspipe: Confessions of a Mafia Boss, and, The Butcher: Anatomy of a Mafia Psychopath.

Mr. Carlo was a fabulous writer who wrote compactly, getting to the point quickly, not taking circuitous routes to let the reader know what was important. Yet he was an author who at times used wonderful imagery, seeing the inner beauty of things and people. Mr. Carlo could describe picturesque scenes on the beach, the feel of a gentle breeze, or the glorious beauty of a sunset. In contrast, he vividly described the barbaric nature of killing: “I see the blind eyes of blue-black guns . . . I hear the high-pitched, blood-curdling screams, as though they are the high notes of a Stradivarius in a master’s hand.” Superb writing.

The author was a student of human nature, studying people, wanting to know why they did what they did. Of Richard Kuklinski, “The Ice Man,” a brutal killer who traveled around the world murdering and torturing people, Mr. Carlo wrote, “. . . a married man, Kuklinski, who has children, living a seemingly happy, suburban life . . . a man who slept on the floor of his eight-year-old daughter Merrick’s hospital room when she was suffering from a bladder infection.”

Mr. Carlo marveled at the incongruity of a vicious murderer who dismembered his victims, yet one who has the capacity to care for and love his young daughter. Throughout the book, Mr. Carlo often remarks about ALS, the killer taking over his body, how it seems to stalk him wherever he goes. It is always there; he cannot escape its presence. Indeed, he almost humanizes his ailment, cursing it, bemoaning the fact that it is relentless, taking away small pleasures, bit by bit. The disease progresses to the point where Mr. Carlo is unable to write or even breathe without a tube in his mouth. This makes it even more difficult to dictate to his assistant, Kelsey, who has now become Mr. Carlo’s hands. Nevertheless, he plunges forward, refusing to allow his torturer to win.

On the night of a launch party for his book, The Butcher, the author hosted a room full of people, even though his limbs were useless, and he was tethered to a breathing machine. In New York’s trendy Manhattan neighborhood, Tribeca, at the Locanda Verde Restaurant owned by Robert DeNiro, Philip treated his guests to the perfect party. His true stories about the Mafia and the killers it spawned, attracted more than a few Hollywood luminaries, to include DeNiro, Joe Pesci, Mickey Rourke, and Tommy Mottola.

Mr. Carlo’s work is well researched; even law enforcement was a willing participant, working with him to ensure everything in his books was right. His lengthy interviews in prison settings with convicted killers are legendary. He somehow created a bond with society’s outcasts, one that allowed him into the minds of barbarians who refused to discuss their monstrous behavior with anyone else. According to his memoir, two of his books will likely become movies, with at least one of them starring Robert DeNiro.

Could Philip Carlo have had an inkling that the end was near when he penned his story? It’s pure speculation on my part, but isn’t it is curious that his memoir, The Killer Within, will be published just six weeks after his death? Impeccable timing by an impeccable writer. The industry has lost a great artist; the world has lost a wonderful human being. Rest in peace, Mr. Carlo, knowing that your last effort was your best.