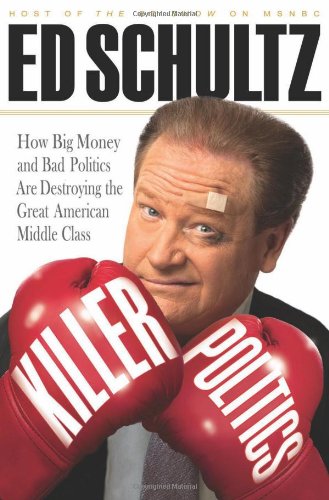 Killer Politics is a lot of fun. There isn’t much original research or analysis—mostly the standard liberal prescriptions—but author Ed Schultz, host of a daily news program on MSNBC and a nationally syndicated talk-radio show (more on that later), has an earthy, colorful way with words that is definitely not in the standard liberal repertoire:

On the federal Troubled Asset Relief Program that propped up financial institutions in 2008–2009: “. . . the cost of bailing out those turkeys was less than letting them drag everyone else down, too.”

On Fox News’s claim to be fair and balanced: “Yeah, and the pope is a Baptist.”

On Washington gridlock: “Unless the Democrats unite behind the president [and] grow some balls . . . the conservatives will be back in power faster than Dick Cheney can steal candy from a baby.”

Schultz’s main thesis is himself. As he sees it, he’s the blue Rush Limbaugh, the only liberal with a huge, national, talk-radio audience (100 affiliates), a hunter from North Dakota who was almost drafted by the Green Bay Packers in 1978 and who supports national health insurance. (He also claims personal credit for helping elect President Obama and Democratic majorities in Congress, and he implies that former President Bill Clinton used to send him Christmas cards.)

In other words, Harvard-educated eggheads—like, well, Obama—can’t reach the working stiffs who have been manipulated by Limbaugh and other right-wing radio hosts. Only a guy who speaks their language, like Schultz, can do it.

Moreover, in a book that roams from student loans to global warming to the Patriot Act and beyond, Schultz does have some original proposals. Among the better ones: President Obama should hire a White House advisor who has run a small business. Among the flakier: Pay Afghan opium-farmers to leave their land fallow, rather than plant alternative crops. Oh great, let’s export the bloated U.S. farm subsidy program to the Middle East.

(Actually, Schultz is a big booster of the U.S. farm program. Then again, he’s from North Dakota.)

Unfortunately, Schultz undermines his main thesis in one key passage, where he laments that 50 or even 60 Democratic votes in the Senate aren’t enough to pass progressive legislation because “many of the Democrats come from conservative districts. Really, in some respects in America, we have two conservative parties, one is just less extreme than the other.”

Um, if the majority of American voters are conservative, then why is he surprised that Republicans keep winning elections, Obama compromises, and his beloved liberal ideas like national health care never get passed?

But that doesn’t mean Ed Schultz should shut up and go away. On the contrary. Keep talking, Ed!