Kill Switch: The Rise of the Modern Senate and the Crippling of American Democracy 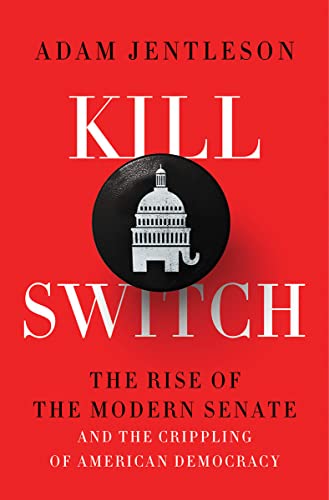 The United States confronts many problems besides an often recalcitrant and myopic Senate. But because Congress lies at the heart of our government, the laws that address these problems must pass through the Senate—with few if any exceptions. What was once a free-flowing body of relative equals has devolved into a rigidly hierarchical, polarized institution that fails year after year to resolve persistent problems.

Adam Jentleson, an aide to former Democratic Senate majority leader Harry Reid, has written a book that explains why the U.S. government functions so poorly. The book’s title sums up the whole story: Kill Switch: The Rise of the Modern State and the Crippling of American Democracy. This book explains a great deal of the past and how to make things better in the future.

The-kill switch is the filibuster—or just the threat of one. Jentleson tells how liberals as well as conservatives have exploited the filibuster over the years. From its inception in the middle of the 19th century to today, the filibuster has served as a tool to empower a minority of white conservatives to override majority rule whenever they find themselves outnumbered. They have done so to preserve their power, their way of life, and the priorities of wealthy benefactors—from the slaveholders of the past to conservative billionaires of today.

Senate rules now permit senators to speak for as long as they wish and on any topic they choose, unless “three-fifths of the Senators duly chosen and sworn” (usually 60 out of 100 senators) vote to bring debate to a close by invoking"cloture"under Senate Rule XXII. Even if Senators vote to cut off debate, the process takes up floor time. For much of its history, the filibuster was used primarily to prevent civil rights legislation from becoming law. But more recently, Republicans have refined it into a tool for imposing their will on all issues, wielding it to thwart an increasingly progressive American majority represented by Barack Obama’s agenda and appointees.

Under Donald Trump, McConnell merged the filibuster with rigid leadership structures initially forged by Lyndon Johnson, in the process surrendering the Senate’s independence and centrality, as infamously shown by its acquiescence in Trump’s impeachment trial. The result is a failed institution and a crippled democracy.

Democrats as well as Republicans have used the filibuster to protect their narrow interests. But there is reason to hope that Democrats in  the new Congress will stick together against any effort to thwart a progressive agenda. Voters in Georgia have changed America’s possibilities by electing two Democrats to represent them in the U.S. Senate. When the two senators from Georgia take their seats, there will be 50 Democrats facing 50 Republicans in the Senate. This 50-50 balance of power  can be tipped by the presiding officer, Vice President Kamala Harris.

Taking the reader into Capitol Hill backrooms where the institution’s decline is most evident, Jentleson shows that many of the greatest challenges of our era―partisan polarization, dark money, a media culture built on manufactured outrage―converge within the Senate. Jentleson offers incisive portraits of the powerful senators who laid the foundation for the modern Senate, from Calhoun to McConnell to LBJ’s mentor, Richard Russell, to the unapologetic racist Jesse Helms.

If Democrats stick together, they can stop the Senate from acting as a tool by which a minority—mostly rich white men—have blocked policies that could benefit a majority of Americans.

Jentleson offers reason for hope. To eliminate the filibuster would be much easier than to eliminate the Electoral College. It does not require a Constitutional amendment but can be accomplished  by a simple majority vote—not a supermajority. If Democrats can muster 51 votes (with Vice President Harris), they can rule out future filibusters and prevent Republicans from dictating the Senate agenda and terms of debate. Americans and their elected representatives could still disagree sharply on many issues, but both bodies of Congress could begin to act on pressing issues. Mitch McConnell could remain leader of Senate Republicans, but could no longer exert a stranglehold on any issue that arises.

Republicans should join Democrats in removing the filibuster from the Senate tools. Everyone has a stake in having a government that honors majority rule but that also respects and hears what minorities have to say. Conservatives as well as liberals should welcome open debate and fair play in both houses of the legislature. So long as part of the Senate retains a kill switch, it is difficult to see how Americans can meet the challenges they face. With a Senate that functions, solutions may suddenly appear within reach. The voters of Georgia have made this possible. They have contributed to the efforts across the country to generate a legislature that works for all Americans.