The Kill Jar: Obsession, Descent, and a Hunt for Detroit's Most Notorious Serial Killer 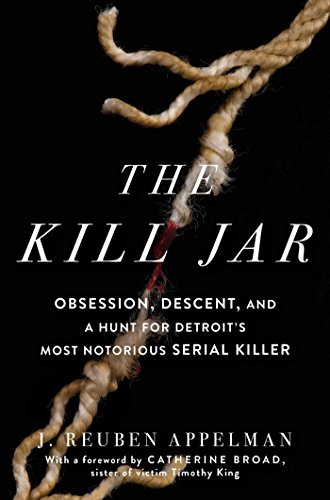 Between the winters of 1976 and 1977, an evil force prowled the blue-collar and tony towns of Oakland County, Michigan. During this time, four children between the ages of ten and twelve were abducted, held captive for days, sexually assaulted, and then murdered. Each was dumped in the white snow like so much trash. The man responsible for these murders came to be known as the Oakland County Child Killer (OCCK). He was never caught. The Kill Jar is about author J. Reuben Appelman, a licensed private investigator in Idaho, and his search for the truth about this late ’70s monster.

The Kill Jar is more than a true crime potboiler. Appelman’s narrative is as much about the OCCK case as it is about how his life fell apart while researching this ice-cold string of murders. Between 2010 and 2011, Appelman found himself in the midst of a divorce that included adultery, a renewed relationship with a hopeless junkie, and failed attempts to reconnect with his formerly abusive father. On top of all of this, The Kill Jar is a sociological portrait of the ruined environs of Detroit and the cities and towns that surround it. This book is bleak, almost unbearably so.

For those with the stomach for human depravity, The Kill Jar is a must-read. Appelman is an amazing writer who speaks with an eye so jaundiced that the pages are yellow by proxy. There is gutter poetry in this book. There is also a conclusion that goes beyond horrific. During this years-long investigation, Appelman managed to piece together a theory: the OCCK case was connected to a pedophile ring that catered to the elite of Detroit. Such a conclusion sounds like a conspiracy theory, but The Kill Jar lays out in detail how many well-connected pedophiles knew each other and worked with each other in 1970s Michigan.

There was the philanthropist who used a private island in Lake Michigan to molest and take explicit photographs of young boys. These photographs and 8mm films were mailed to pedophiles, both rich and poor, including one of the OCCK case’s chief suspects. That suspect somehow managed to shoot himself in the head with a .22-caliber rifle and not leave behind gunshot residue on his hand. Most bizarre of all, The Kill Jar talks about a failed politician and party magician who “groomed” his victims for years and a General Motors executive who may have been a pedophile.

The Kill Jar is the opposite of easy reading. This book is not for everyone. However, The Kill Jar is a well-written examination of life’s morbid underground. Appelman, who survived an attempted abduction while a child back in the 1980s, proves without a shadow of a doubt that life has always been dangerous. In the “good old days” of Detroit, sexual sadists and a serial killer preyed on the children of the community, regardless of whether or not they came from the rundown streets of Flint or the verdant suburb of Bloomfield. The Kill Jar acknowledges the uncomfortable truth that “stranger danger” and violence-minded pedophiles are more common than is comfortable to think about.