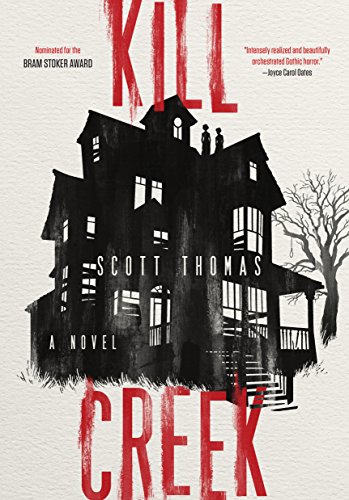 “Kill Creek is the perfect novel to read on Halloween.”

Four horror writers and an Internet host met in a haunted house. It sounded like the beginning to a bad joke but it wasn’t.

Every October, WrightWire, an Internet “destination for horror events,” does something huge for Halloween. After reading Phantoms of the Prairie, its host, Wainwright, has a brainstorm. He invites four well-known authors to spend a “celebrity vérité” in the house at Kill Creek, the site of at least two murders.
“Everyone loves a haunted house. That’s the pop. Then I needed the culture. That’s the four of you.”

Daniel Slaughter writes Christian horror stories, where the characters are redeemed through Faith; T. R. Moore authors slashers, and there’s so much blood on the pages, the words float; Sebastian Cole is the elder statesman of the group, the man whose writing influenced all the others; and Sam McGarver pens modern gothic horror.

Each has his own reason for being there; each believes he’s losing his popularity with his readers and this is the way to revive it.

The interview itself is anticlimactic. A few revelations are given in private. Some eerie happenings are easily laughed off as imagined. The odd thing is that the upper story of the house is bricked up. There’s no way to enter the room at the top of the stairs, supposedly where the invalid sister of the last owner lived and died.

“‘Wait, I remember this place,’ Daniel said. ‘This was the house where those two creepy women lived.’
‘The Finch sisters,’ Wainwright said.
‘No one’s been able in live in it since it was built. When people move in, the house comes alive.’”

Maybe that idea, plus the isolation is what makes everyone think of things and people, they’ve lost, but otherwise, everything goes as planned. The following morning, they pack up to leave, and the one blot in the story happens, the thing making this particular podcast memorable.

Daniel is soon faced with a terrible tragedy. He’s devastated, but the broadcast is a hit. In spite of the tragedy, all four are energized. They want to write, have to write, ignoring anything, anyone else. In his own style, each tells about a house with a bricked-up room, and of the people trying to break into it, and then—the stories stop, the flow of words ceases.

Everyone has writer’s block.

Sam gets in touch with Moore, to discover she’s having the same problem. They contact Daniel and Sebastian. Same thing. Wainwright reappears.

When the author of Phantoms of the Prairie dies soon after speaking with them, Sebastian confesses he finished his novel.

“‘That’s the same time our stories came to a stop. When all of us stopped writing. Because it wasn’t necessary anymore. Because the house chose Sebastian.’”

There’s only one thing to do. They have to return to Kill Creek, open the bricked-up room, and free themselves from whatever hold the house has placed over them. “They could flee, they could fly far, far away, but they could never escape.”

The idea of a haunted house is a popular literary theme, having done for ages. Witness The Haunting of Hill House, et al. Generally individuals are trapped in the house, fighting their way through their insecurities and fears, to either perish or escape.

In Kill Creek, Scott Thomas does it one better. He allows his characters to think they’ve escaped, returning to their lives unscathed, and rejuvenated. The twist here is that the horror sets in after they leave. It follows them, linked by tendrils the house places in their psyches.

In order to sever the links, they have to return. They don’t realize this is what the house planned, or what is waiting for them inside that room, but they have to go.

For those who’ve ever seen or heard of a house with a shadowy reputation, the moment Thomas’ characters return to Kill Creek will be a turning point of dread. Undoubtedly, there will be a few who may stop, close the novel, and walk away. Those who’ve read other haunted house novels will know nothing good can be gained. From there on, though clichés abound to horrific effect, it’s author Thomas’ ability to give each a twist of originality that creates such a lasting effects. The reader will conjure in his own imagination everything described, making it more horrific by his own mental embellishments.

There’ll be no admonitions to read this one with the lights on or alone at night. That’s a given. Alone or with friends, lights blazing, or a single reading lamp casting shadows over the page, it won’t matter. The result will be the same: shivers for many nights afterward.

Kill Creek is the perfect novel to read on Halloween.