Kill All the Lawyers: A Mystery 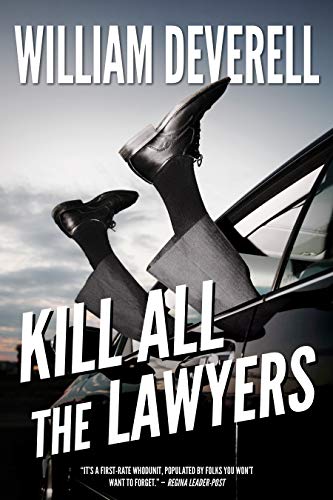 “filled with biting wit and smart dialogue, with a twist of an ending the diehard mystery reader won’t see coming—and an epilogue featuring the most ironic surprise of all.”

On the west coast of Canada, someone is out to dispose of lawyers getting the “bad guys” acquitted.

It starts with Arthur P. Besterman, a lawyer who always loses his cases—until he doesn’t. To everyone’s surprise, Arthur wins his current case, and the next day, his body is found in his car, very much dead.

“For a while the Bar Association maintained pressure on the authorities to solve the crime. Lawyers don’t get killed. Lawyers were members of a professional elite, sacrosanct, removed from the battle. Police and criminals get killed, not lawyers.”

While lawyer Brian Pomeroy of Pomeroy, Macarthur, Brovak, and Sage, is doing something naughty with his girlfriend, someone takes a potshot through the windshield of his car.

“The policeman spent a minute probing around the car and finally came up with a lead slug imbedded in the paneling. As he was calling his detachment office, he asked Brian, “Know any reason someone’d want to shoot at you?”

All Brian said was, “I’m a criminal lawyer.”

The officer nodded as if that were motive enough.

Brian felt sick. He knew of a person who would want to kill him, all right. His wife, Caroline.”

Shortly afterward, Brian leaves town, taking refuge in a client’s home in Puerto Próspero, Costa Rica, where he plans to work on a mystery novel and avoid accepting the divorce papers Caroline has filed.

In the meantime, another member of the firm survives a hand grenade tossed into a victory celebration of another acquittal.

As the smoke clears, John Brovak, intended recipient of the celebratory grenade proclaims:

“Somebody is trying to kill the great lawyers of Vancouver.”

In letters addressed to the Vancouver Sun, someone claims responsibility for the crimes, with paste-up letters clipped from the newspaper and the Gideon Bible—"Woe until ye lawyers! For ye lade men with burdens too grievous to be borne.” The Sun begins receiving communications from someone signing himself “The Executor of God.”

The RCMP has its suspects but no real proof, until Brian Pomeroy returns from Costa Rica, bringing with him Capitan Francisco Sierra of La Guardia Civil, a fellow mystery lover.

“Hercule Poirot is his hero.”

Francisco sees things the others, who are too close to the case, do not, and it is he, “plump, short, quick of eye, with a well-tended moustache,” who will solve the case, much to everyone’s surprise and one lawyer’s broken heart.

Kill All the Lawyers is a leisurely stroll of a murder mystery.

While lawyer-turned-novelist Brian follows the writing guide The Art of the Whodunit to the letter (“waste little time in wasting your first victim”), and the author of this novel does the same, having the first murder occur on page two of his story, this merely fools the reader into believing this story is going to be short, not too sweet, but definitely to the point. Surprise! He must read on for another one hundred and seventy-six pages before another murder actually occurs.

In between, however, there are enough hijinks, both in and out of the courtroom, intrigues, love affairs, and downright hanky-panky described in such detail and at length that the same reader is distracted and entertained enough to almost make him forget a murderer lurks somewhere in the novel’s pages.

Written by an author himself a trial lawyer for 25 years, this novel is reminiscent in its irreverence, quirkiness, and black humor to the John Wilkes’ courtroom series by attorney Charles Sevilla. Kill All the Lawyers has been called “viciously accurate” in its depiction of the lawyers and judges in the story, and is filled with biting wit and smart dialogue, with a twist of an ending the diehard mystery reader won’t see coming—and an epilogue featuring the most ironic surprise of all.