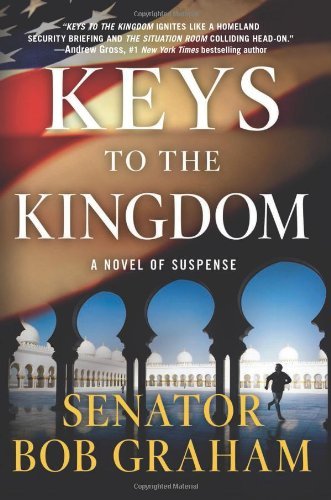 It might seem impossible to turn the concept of Al Qaeda getting nuclear weapons into a boring novel. But Bob Graham manages to do just that.

There is no way to sugarcoat this review: The Keys to the Kingdom is dreadful. If the author didn’t have the title Senator in front of his name, this book would probably never have been published.

It violates every elementary tenet of good fiction: full of turgid writing, unbelievable coincidences, too many unnecessary details to get from Point A to Point B, two- (or one-) dimensional characters who are either too perfect or too evil, telling instead of showing, and stilted dialogue that sounds like speeches from the Congressional Record.

Not only do the hero and his sidekicks conveniently get introduced to people who know all about decades of secret Saudi-U.S. negotiations, Cayman Islands bank accounts, and the whereabouts of Osama bin Laden, but these omniscient sources are happy also to share their entire sagas, in grammatically perfect paragraphs.

A murder suspect isn’t merely read his Miranda Rights, he is read those rights. Word for word. For an entire page.

But certainly a thriller like this must keep readers on the edge of their seats? Think again. The plot is nonexistent for the first half of the book and ridiculous for the second. Even the hero’s best friend admits that, “What never has made sense to me is the Saudis helping bin Laden” get The Bomb—a rather pivotal issue that the book attempts to explain only in one brief conversation. (The Keys to the Kingdom was written before bin Laden was killed, of course, but the concept is just as ridiculous whether he’s alive or dead.) As another character points out in that conversation, “I thought he [bin Laden] was the sworn enemy of the [Saudi] king and had tried to assassinate Prince al-Faisal.” (Oh, that little tiff.) Then the novel abruptly morphs from a badly written”24” to a badly written “Law & Order”—but just for 20 pages, after which the hero is easily exonerated of murder and goes back to saving the world from terrorism, singlehandedly.

That hero is Tony Ramos, a sexy, sinewy, sensitive Cuban-American ex-tennis pro, ex-Special Forces commando, now deskbound in the foreign service but still brilliant and brave. (Also a talented chef.) His mentor, a retired Florida senator obviously modeled after Graham—that part is actually kind of cute—asks Ramos to investigate hints that the U.S. government has been covering up extensive Saudi complicity in the September 11 attacks.

After multiple lectures on how the White House has mishandled Iraq and Afghanistan, plus lines and lines repeating every word of greeting and introduction every time anyone is introduced to anyone else, plus the red-herring murder rap, this investigation eventually leads to the discovery about bin Laden and the nukes.

The high point is undoubtedly the sex scene between Ramos and his girlfriend, Carol Watson, a Treasury Department forensic accountant: “He kissed her, encircling her parted, moistened lips . . . After a passionate eternity of rhythmic plunging, they climaxed together.” A clear candidate for the Literary Review’s annual Bad Sex Award.

To be fair, Mr. Graham’s heart is in the right place. He fervently wants to make the case that the war in Iraq was wrong and unnecessary, the war in Afghanistan has been incompetently pursued, the U.S. government has covered up Saudi Arabia’s secret support of the 9/11 hijackers, and Saudi Arabia is trying to acquire nuclear weapons.

If he’s correct, these are important issues. Indeed, Mr. Graham raised them when he was in the Senate until 2005 and in a prior nonfiction book, Intelligence Matters: The CIA, the FBI, Saudi Arabia, and the Failure of America’s War on Terror (Random House, 2004). Those efforts didn’t convince the American public, so apparently Graham thinks that putting them in a jazzy thriller would catch more attention. In theory, he’s probably right. But he didn’t write that jazzy thriller.

What this book actually proves is that the publishing industry has cut costs too much and is too enamored of celebrity. The Keys to the Kingdom desperately needs either a line editor or a ghostwriter—or both.