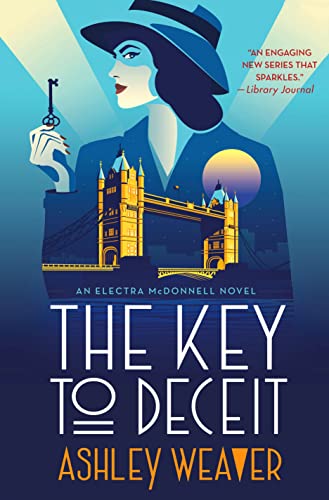 “It’s easy to get wrapped up in Weaver’s storytelling skills as she carefully unfolds her story.”

Life presents its own set of difficulties under the best of circumstances, but add in World War II London, and those difficulties increase exponentially.

That’s what Electra (Ellie) McDonnell encounters in Ashley Weaver’s new novel, The Key to Deceit. Ellie’s family has an interesting history as well as an interesting future. A family of thieves, they are caught by the long arm of the law and presented with an intriguing opportunity: work for the government defending Britain during the war or go to jail. An easy decision to make, and thus Ellie finds herself knee-deep in assisting the law.

When a young woman is found floating in the Thames, Major Ramsey calls on Ellie to assist with a unique problem. A bracelet with a lock is found on the young woman’s wrist, and in order to not destroy possible evidence, he calls upon Ellie and her lock-picking skills to remove the bracelet.

The victim is identified and as more information rises to the surface Ellie and Major Ramsey uncover a connection with Nazi spies. They follow their leads and discover where she lived.

As the investigation into the young woman’s life expands, Weaver further unfolds the story with a second murder. A young woman dies in the same manner as the first. Both women lived in the same boarding house, and thus a connection to international espionage begins to unfold with its requisite dangers.

At one point when the Nazi war machine begins a bombing raid over London, Weaver employs her skills at writing vivid description as she paints a picture of the horrors of war, while at the same time weaving those horrors into clues and foreshadowing and red herrings for Ellie and Major Ramsey to sort through.

One of the best things about Weaver’s story are her obvious research skills and her ability to use that research to enhance the story. Weaver keeps her cast of characters at a reasonable level, not to overpower the story with too many or too few.

Major Ramsey is sketched as quite the attractive man, and Ellie is drawn to him, and yet there is Felix—one of her ilk to whom she is also drawn. Here Weaver sets the stage for romantic maneuvering, especially since both men dislike each other.

Written in the first person, the novel travels along with Ellie as she considers her short term and long-term future with (or without) Major Ramsey and Felix. She plants the seeds of romance without bringing either relationship to an end, thus leaving open future opportunities.

The story unfolds in a logical process while leaving the reader wondering who the guilty party is. Weaver clearly ties up all the obvious loose ends, discards the red herrings, and the foreshadowing she set forth earlier in the story.

As this is only the second in her series, Weaver opens the door to garnering many fans as she develops her characters and possible romances travel between Ellie and the major or Felix. It’s easy to get wrapped up in Weaver’s storytelling skills as she carefully unfolds her story.