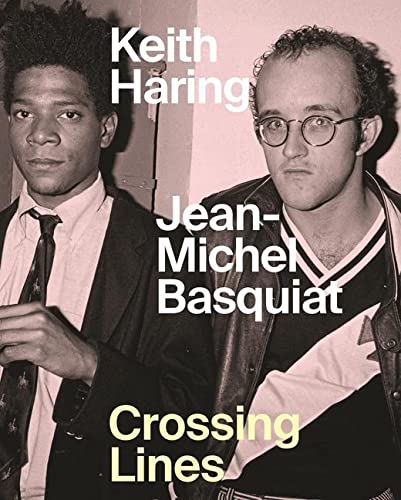 “This book is for art lovers, and lovers of beauty and truth who value the human spirit that will not be denied by the destructive forces that humans have created. It’s a book to be treasured and enjoyed again and again.”

Together, Keith Haring and Jean-Michel Basquiat are the perfect examples of successful artists who began to create their signature works on the margins of American society.

For a long decade, they projected their magic on the interior and exterior walls of buildings, in gritty streets, and wherever there was blank space and an open invitation to draw lines, splash paint, and reinvent the very idea of art.

To get into a museum, it would seem, one must first reject museums as out-moded institutions. So this book suggests.

It wasn’t inevitable that the two men would become stars of the international art world, their work prized by dealers and gallery owners from Japan to Australia, Rio to Berlin.

Haring and Basquiat might have gotten lost in the shuffle of New York City, an urban monster of steel, glass and concrete that has swallowed artists and spit them out in little pieces.

Haring, the white guy who was born in Pennsylvania, and Basquiat, the person of color who was born in Brooklyn, New York, of Haitian and Puerto Rican parents, came along at the right time.

That was the late 1970s, and then throughout the 1980s, when New York pulsed and throbbed with art, graffiti, music (especially punk and hip hop), political protests, and theatrical performances that were in the face of citizens and the police, and defied nearly all the rules.

It was also a time and a place of death and disaster. HIV/AIDS spread rapidly and took an especially heavy toll on artists and performers. Basquiat died on August 12, 1988, from a heroin overdose after battling his addiction for years. He was 27. What a loss!

Haring learned that he was HIV positive in 1988, the same year he painted a mural in a New York City public school that contains the phrases, “Don’t Believe the Hpe,” “Safe Sex or No Sex,” “Respect Yourself” and “Knowledge.” He died in February 1990 at the age of 31. The cause of death was AIDS-related complications. Another big loss.

All the above information about the two artists can be found on Wikipedia, and also in the extensive and very helpful chronology at the back of a big, beautiful coffee-table book titled Keith Haring and Jean-Michel Basquiat: Crossing Lines. It weighs five pounds, measures 9.25 inches by 11.25 inches, and was initially published in Australia in 2020. It would be criminal to use it as a doorstop.

The National Gallery of Victoria in Australia mounted a major exhibit of the work of the two men in 1984. Two hundred pieces from that exhibit are in Crossing Lines, which has been published now for the first time in the US, and is cause for rejoicing by American fans of Haring and Basquiat, who collaborated in 1988 and 1989, and who were friends and brothers to the end.

The cover photo by Ben Buchanan from 1985 shows the two artists standing side by side and looking rather sloppy and definitely not dressed for success. Inside, page xi offers a photo of Basquiat kissing Haring on his forehead. They both look happy.

Crossing Lines offers helpful essays, especially the introductory piece by Dieter Buchart, who describes the first meeting between Haring and Baaquiat, which took place in the spring of 1981.

Buchart also offers a lengthy quotation about Haring from experimental novelist William Burrooughs the author of Naked Lunch. “Just as no one can look at a sunflower without thinking of Van Gogh, so no one can be in the New York subway system without thinking of Keith Haring!” Burroughs exclaimed. He added “That’s the truth.”

There are more essays, along with interviews that take readers into Haring’s and Basquiat’s art. They are worth reading.

Still, the printed word can’t compete with the work of the two artists, both of them unique, both original, both products of the society in which they lived and created, who held up a mirror and reflected back to the American public what they saw, heard, and felt. It was a woke moment that still resonates.

Crossing Lines shows that the work of Haring and Basquiat is as alive today as when it was first created with passion, playfulness, and rage, too.

This book is for art lovers, and lovers of beauty and truth who value the human spirit that will not be denied by the destructive forces that humans have created. It’s a book to be treasured and enjoyed again and again.