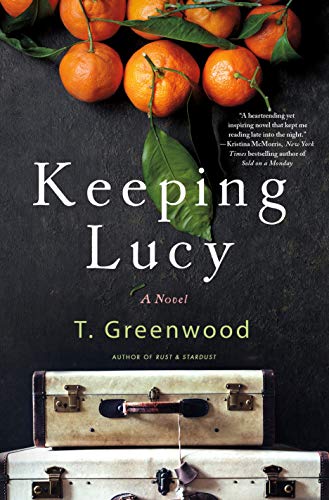 “Keeping Lucy is a profound tale of a mother's unconditional love for her child and her commitment to go to any lengths to protect her.”

Every pregnant woman prays her baby will be born healthy, and this is the case with Ginny Richardson. It is 1969, and Ginny is happily married to her attorney husband, Ab, who is a partner in his father's Boston law firm. They have a gorgeous house in the tony suburb of Dover, Massachusetts, and a darling four-year-old son named Peyton. Nearing her due date, Ginny hopes she will have a daughter.

Ginny meets Ab (Abbott) while she is working as a librarian at Amherst College. Raised by a single mother after her father died when she was ten, she considers herself an ordinary middle-class girl with dreams like any other young lady: to get married, live in a nice house, and have children. What she doesn't expect is meeting Ab—a handsome man from a well-to-do family. They date, and before long Ab professes his love for her, stating they will marry when he graduates, and after a six-month stint in the IVS. (International Voluntary Services "volunteers help third-world countries build houses, get clean water, and farm their land.") He is expected to attain his law degree and work at his dad's firm, but he does not want this:

"'I hate the law,' he said. He chuckled, but his eyes belied something like fear. As if he'd spoken a secret aloud and wanted to take it back. 'Of course, I don't have much say in the matter.'"

Ab's parents believe Ginny is instrumental in keeping him out of graduate school and do not hide their displeasure with her. Ab's plans change when Ginny becomes pregnant, and he does end up attending Harvard Law. Ab's father provides them with a little house in Cambridge where Peyton is born and where they live until moving to Dover, closer to the senior Richardsons.

Ginny delivers a girl they name Lucy, though is heartbroken to learn she has Down Syndrome. Lucy is quickly hauled away and sent to Willowridge, a special school for the "feeble-minded" in central MA. Ab tells her this is an excellent place and the best thing for the baby who allegedly suffers some form of heart defect and will not live long. He suggests Ginny considers Lucy has died. How can a mother believe her child is dead when she's not?

Two years pass and Ginny's long-time friend, Marsha visits with clippings about Willowridge. The papers portray pictures of filthy rooms, depravity, and neglect, as well as notice of an upcoming class-action suit against the school from parents with children housed there. Horrified, Ginny brings this to Ab's attention, though he proclaims the news is sensationalism.

Ginny cannot deal with his blasé attitude, so she packs a bag and heads out with Marsha and Peyton. She gets permission to take Lucy for the weekend, and upon entering the facility, she witnesses the squalor and depravity the newspaper article does not begin to cover.

Lucy, silent and frightened, make the women decide to flee the area. Ginny realizes her father-in-law had been a big player in putting her child away. The snotty Richardson's could never accept a "defected" granddaughter, so it’s best to throw her away as if she never existed. Ginny vows, no matter what, she will not bring Lucy back to Willowridge.

As they head south and register at a hotel, Ginny phones her mother to alert her of their location:

"'What, Mama?' Ginny said, feeling her heart start to race.

"Her mother was quiet on the other end of the line. 'How is she? Your baby girl?'

“The fist in Ginny's chest opened, and she felt tears welling up in her eyes. 'She's perfect, Mama. She's just perfect.'

"'Virginia,' her mother said, and Ginny held her breath. She never called her by her given name. 'You need to get her back to the school before tomorrow. There can't be any delay.'

"She heard her mother draw in a deep breath.

"'Did you sign any papers?' she asked. 'At the hospital?'

"'No, honey,' her mother said. 'At the hospital when she was born.'

"That night was still such a blur. The blood moon, the cruel nurse, the baby whisked away before Ginny even came out of her ether fog.

"'He signed Lucy over,' her mother said. 'To the state. He said it was the only way they would take her.'

"Her words felt like a fist to Ginny's chest that knocked the wind out of her. She couldn't speak."

As they travel further south, they devise their escape. Ginny phones Ab affirming she will not return Lucy and becomes nervous when he says she kidnapped their daughter and could end up in jail. Ginny would rather die herself than submit her beautiful baby to the horrors she witnessed at that place.

As the days pass, Lucy blossoms, becoming more animated, making Ginny love her more if that's possible. She now realizes she's been controlled by Ab and his parents, but she must fight for her daughter.

This novel based on true events demonstrates the changes over the past five decades. During the late ’60s and early ’70s wives were subservient to their husbands and expected to remain at home, raise the kids, and keep the house. Men were in charge and not to be questioned. Though Ab gives Ginny an "allowance," she knows nothing of their finances, bills, or other important matters, and succumbed to being submissive to Ab and his controlling parents.

Another factor is children with disabilities were mostly locked away, though those with Down Syndrome are extra compassionate and loving. Ginny displays the love of a mother not allowing anything to come between her and her beloved child.

It is uplifting how today’s world is different, for disabilities are widely accepted, and women now stand up for themselves and their children without allowing to be dominated or kept silent.

Keeping Lucy is a profound tale of a mother's unconditional love for her child and her commitment to go to any lengths to protect her.