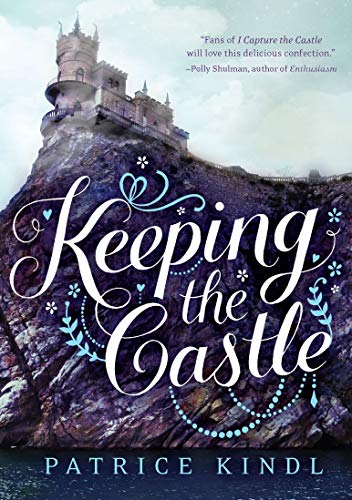 With Keeping the Castle, Patrice Kindl offers an effervescent cocktail of a lively protagonist, a Dickensian delight in colorful names, and a plot tingling with romance and rapier wit. Jane Austen fans, here’s your perfect summer pick-me-up.

Set in 19th century England, Ms. Kindl’s playful comedy features a household with an incompetent but loving widow; her unmarried stepdaughters, Prudence and Charity, who were “disagreeable and incapable of disguising the fact;” the heir to the castle, four-year-old Alexander (from her first marriage); and her lovely and practical daughter, Althea.

The strong-willed protagonist is an endearing Cinderella short on funds but long on sharp observations, some of which destroy her chances with suitors.

The author, in fact, immediately plunges readers into a hilarious “oops” moment in which Althea, being proposed to by Mr. Godalming, unintentionally voices her appreciation of his financial assets. To her dismay, Althea learns a man may admit loving a woman for her beauty, but a woman must not admit she loves a man for his wealth.

There, in the “silvery light of early spring,” which transformed “the overgrown shrubbery into a place of magic and romance,” Althea’s sees her marriage prospects wither. Mr. Godalming, wetting his big red lips, suddenly withdraws his proposal, insisting, “any consideration of the contents of a man’s purse by a lady he is courting is . . . mercenary and shows a cold heart.”

Now Althea must take her beauty and her blunt words elsewhere. Fortunately, other prospects arrive, as the young, wealthy, and handsome Lord Boring moves into the neighboring estate in Lesser Hoo and invites all to a ball. Althea, battling both her threadbare wardrobe and her rude and self-obsessed stepsisters, sets her sights on Lord Boring.

Making witty references to Austen’s beloved heroines, the author infuses the plot with pointed irony and insights. The power of a woman’s beauty is both acknowledged and tenderly mocked, as in the scene where Hugh Fredericks, Lord Boring’s cousin, gapes at the gorgeous painting Miss Vincy does of Althea.

In Austen’s Emma, the protagonist produces a flattering portrait of her unimposing friend Harriet, in the futile hope of inspiring a certain aristocrat to propose to Harriet. Ms. Kindl’s star similarly veers off course, mistakenly seeing Mr. Fredericks as a likely husband for her plain but artistic friend.

Most readers, however, will recognize that the charged repartée between Althea and the brusque Mr. Fredericks recalls Austen’s Elizabeth Bennet and Mr. Darcy, who prove to be supremely compatible.

While Keeping the Castle presents a pleasing Regency romance geared at young adults and complete with a suitably happy ending, the author’s dramatic flair and keen comedic touches sustain a bubbly spirit with just the right bite.