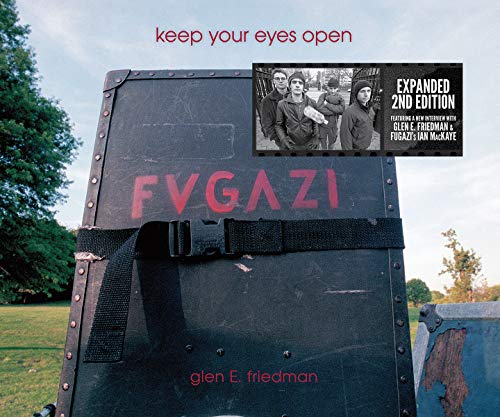 Keep Your Eyes Open: The Fugazi Photographs of Glen E Friedman offers itself simultaneously as art book and fan collection. In the way a photographer may choose a single subject for their art—Robert Mapplethorpe and his dogs, for example—Friedman captures DC post-hardcore band Fugazi in unassuming color and black and white. Fans will leaf through to see their musical heroes; others will understand the work with an eye to its artistry; and many will understand Keep Your Eyes Open as both.

Presented chronologically, the photographs follow Fugazi from 1986 until their final show in 2002. The early iconic photos, some released on Fugazi’s first EP, open the work and highlight the unhinged abandonment and stage gymnastics of band members Ian MacKaye, Brendan Canty, Guy Picciotto, and Joe Lally.

The work ducks photography artbook tradition by substituting Fugazi song titles in lieu of artwork names. Keep Your Eyes Open subverts a fanzine approach by keeping photo descriptions minimal, even eliminating any name labels so that an intimate knowledge of the band members is required to identify the individual(s) in shots. In other words, the subject is the band, the music, the shot, the art, and not the individual.

If a theme emerges from the collection outside of the band itself, it is energy and movement. “Turkish Disco” suspends guitarist Picciotto mid-air against a purple Ft. Reno sunset with other guitarist MacKaye bent low to the stage and drummer Canty’s head framed in the foreground. There is no sound, but the moment can be felt—in the air between Picciotto and the stage and in the blurred wash of the crowd against the trees and the evening sky. The companion facing-page photo “Trio’s” accentuates this mood with Picciotto in forward stride, his Rickenbacker slung low to the stage with the fading sun against his shoulder; the shot’s granular blur is a perfect companion for Friedman’s aesthetic.

A similar expressiveness permeates “Recap Modern,” a shot taken at Fugazi’s 1997 Palladium show in NYC. Picciotto is again midair, perhaps three feet or more above the stage, with MacKaye and Lally in the background, but all figures are blurred to the point of being mere smears of color in pseudo-impressionistic style. Commenting on this shot in a conversation, MacKaye states, “The red shirt is bold and it’s definitely an example of [Friedman] shooting without a flash, but I prefer the sharp frozen moments.” It is these “sharper” photographs that dominate the book: a plethora of stage action shots and full band offstage images, many of which were used in album art and promotional material.

Several of the full band shots will be recognizable to fans, especially those used in Fugazi’s Repeater-era. MacKaye describes these shoots as “kind of awkward. . . . wandering around looking for place to engrave our images.” This, however, isn’t necessarily the feeling that comes through in the photographs. Instead, Friedman relays the intensity of the band: their inscrutable gazes; their intense eyes; their tight, unsmiling faces. A later shoot with the band in NYC evidences a more relaxed Fugazi with Friedman framing the band’s whimsy as they change postures and positions; in one, “Instrument,” MacKaye gazes through a faux spyglass in a post-modern nod to the subject looking back at the viewer.

It is also a testament to Friedman that his live stage shots express the intimacy of the moment but don’t insert themselves nor distract from the band. Friedman’s viewfinder is transparent. “Glen [Friedman] is a deeply gifted photographer,” MacKaye says, “and clearly has an eye, an economy to his work that bears out.” MacKaye more succinctly adds, “People didn’t come to see people taking pictures of us.” But now people can see the photographs taken with an almost invisible hand.

Commenting on the Keep Your Eyes Open, MacKaye states it plainly when he says, “Music is not pictures.” In that, the book must be approached on its own grounds, as a collection of photographs. Keep Your Eyes Open is its most successful when Friedman lets the photographs bloom in their richness with full page presentations; it is less successful as Friedman struggles with the identity of the work as artbook/fanbook and resorts to overlays that speak more of a magazine layout and cover up the images.

While Keep Your Eyes Open can be appreciated as a documentary of Fugazi, that is too limiting. The story of Fugazi is not in this book. In fact, with the band’s plain everyday dress, the lack of period backdrops on the stages, and the general absence of identifying markers—these are photographs of a band, of musicians, of music in action, and it is packaged in an excellent glossy hardback. This edition includes Ian F. Svenonius’s playful Foreword and adds an interview with Friedman and MacKaye, which deepens the context for the project and many of the individual photographs.