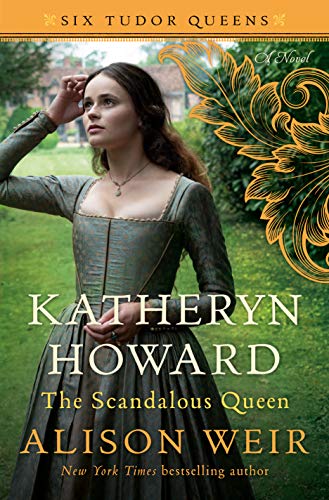 “Weir is a respected historian, an expert on the Tudor line, and she applies her creative imagination to present a novel that is hard to put down.”

In Katheryn Howard, The Scandalous Queen, Alison Weir’s fifth novel about the six wives of Henry VIII, she presents a young woman who, like so many, is used by her family to gain power.

The Howard clan has already experienced power and the fall from grace through another female, Anne Boleyn. It is now their goal to reclaim the power and money they once experienced, and they get that golden chance through Katheryn Howard.

Weir starts her story with the death of Katheryn’s mother, when the girl was a preteen. Katheryn’s father is a ne’er-do-well who marries for money, and his daughter is not a priority in his life. She none-the-less loves him and defends him, but after her mother’s death, he sends her to live with the Dowager Duchess, “his stepmother and widow of Katheryn’s grandfather the old Duke of Norfolk.”

The goal is to secure her a place in court, a goal barely in the making when she arrives there, but one that will blossom over the coming years.

By all accounts, Katheryn is a lovely child, growing into a very attractive young woman, and it does not take long for her first encounter with a male to bloom into a forbidden affair. Harry Manox, a music teacher assigned to her education, falls in love with Katheryn and takes advantage of her inexperience and youth.

As so often happens, first love does not further materialize, and Katheryn soon finds herself in the arms of Francis Dereham, a gentleman usher and close relation to the Duchess. Dereham is a bit of a rogue and as their lengthy affair progresses, he convinces her to pledge her life to him—a pledge that will not bode well for her future.

When the Duchess secures her a place in court, Dereham suddenly takes a back seat to the growing excitement of being in court. Her beauty does not go unnoticed, first by a distant cousin, Thomas Culpepper, who falls deeply in love with her, and they by the king himself. His current Queen, Anne of Cleves, does not capture the king’s amorous drive and their marriage is annulled, opening the door for a new queen.

And here the Howard family sees their opportunity to bring their goal to reality. Katheryn is now groomed to be the next queen. And here is where Weir turns a love triangle into a dangerous rectangle with Katheryn placed not so securely in the middle.

As the relationship with the king grows, Katheryn must stop seeing Thomas Culpepper, but by this time she is in love with him, sharing her deepest experiences. The king, in the meantime is thoroughly enamored with Katheryn, and seeks to marry her, but must know that she is virtuous. She lies; the Duchess lies, Katheryn’s uncle, the Duke of Norfolk lies, but the die is cast.

The King proposes, the marriage is set, but suddenly Katheryn discovers that her past indiscretions haunt her; Harry Manox demands to see her; Francis Dereham has returned and demands that their pledge be honored—he considers her his wife; and Tom Culpepper remains a love of her life that she cannot seem to get beyond.

Although she is fond of King Henry, she does not love him, and the quandary she finds herself in is unrelenting. And then there is the Howard greed for money and power to contend with. For over a year, the marriage continues and trouble swirls around Katheryn until it reaches a boiling point when Manox sends a letter to Archbishop Cranmer, revealing her indiscretions, and now the lies begin to unravel her life.

Katheryn is taken into custody, and she never again sees or hears from the king. Her affairs are laid bare before her, her lovers admit their part in the affairs, these are all considered traitorous acts, and her fate is sealed.

In each of Weir’s creative nonfiction novels, she is careful to develop the primary character of each queen, to the facts of history. Her research is excellent, and her creative imagination develops each character in her books to be good and true, or devious and greedy, depending entirely upon the facts she has uncovered and the individuals involved.

Weir is a respected historian, an expert on the Tudor line, and she applies her creative imagination to present a novel that is hard to put down. The queens are not cookie-cutter characters, but lifelike, real persons with flaws that often dictated their downfall. The same holds true with her presentation of King Henry VIII as a man of great power, who wields that power to his benefit, but also as a man of human feelings and frailties.

In Katheryn Howard: A Scandalous Queen, Weir is exceptionally good at showing how a young woman, unfamiliar with life’s treacherous twists and turns, can be easily manipulated, even as she grows into a queen who, herself, wields power that she does not understand.