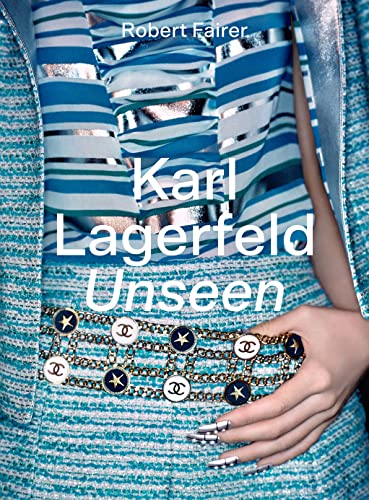 “a celebration of Lagerfeld’s 36 years at the helm of a brand that he single-handedly took from its death throes and turned it into the most celebrated and revered house of couture in the world.”

With over a dozen English-language publications still in print covering the history of Chanel, did the world really need another volume exploring the famed fashion house? Outside of general history and biographies on the brand’s eponymous founder, there are already books dedicated to Chanel’s architecture, its bestselling perfume, and even one on Karl Lagerfeld’s ad campaigns. So what new material could Karl Lagerfeld Unseen: The Chanel Years really bring to the table?

It turns out, a lot.

First and foremost, it fulfills the raison d’etre of every good coffee table book: it in and of itself is a work of art. Bound in fine silk with an embossed cover, it feels expensive. You can envision it being quite at home on a mink blanket draped over some $15,000 couch in a Swiss chalet. Beyond that, the photography is top notch and the printing is glorious—for those that just want something pretty to look at, you won’t find a better tome on Chanel.

Beyond that, it provides photographs you won’t see in a Google image search. From classic moments on the catwalk to behind-the-scenes candids of supermodels getting ready, paparazzi party pics to outtakes from editorial shoots, this depiction of Chanel gives a 360-degree view of the brand-as-lifestyle under Karl Lagerfeld’s direction.

Starting with the Autumn/Winter Ready-to-Wear collection from 1994, the viewer is greeted by the four horses of the fashion apocalypse: Claudia Schiffer, Linda Evangelista, Kate Moss, and Naomi Campbell. And we’re not even on page 25. What follows is not only a who’s who of ‘90s haute couture but a paper runway of Lagerfeld’s best moments. Rather than provide an entire season’s complete collection, Robert Fairer, whose photographs make up this book, highlights where Lagerfeld defined his vision for Chanel, where his choices redirected and honed the brand into the juggernaut it is today.

But the book is more than just a parade of great outfits. As noted by Amanda Harlech in the introduction, “backstage was often more important than the runway”—and this volume gives the viewer a stellar peek into the raw energy and sheer fun that carried Lagerfeld’s designs down the catwalk. There’s camaraderie, even friendship, in these casual shots of girls mugging for Fairer while they wait to present a new collection. Where else will you see a photograph of Gisele Bündchen smoking and drinking a glass of Veuve with crimped hair after her walk in the Spring/Summer 2001 show? There are fittings, detail shots of branded manicures, swarms of attendants in black shouting into headsets, and even a be-furred André Leon Talley beaming as he goofs around with Harlech.

Even the essays are more than standard coffee table fodder. Written by friends and colleagues, they provide an intimate view of Lagerfeld the legend alongside Lagerfeld the person. They aren’t academic treatises on Chanel or Lagerfeld’s process, but anecdotes that make him and his work feel alive, personal, joyous. It’s a celebration of Lagerfeld’s 36 years at the helm of a brand that he single-handedly took from its death throes and turned it into the most celebrated and revered house of couture in the world.

Angelina Lippert is a museum curator and graphic design historian. She is the Chief Curator and Director of Content for Poster House in New York City. She has lectured at myriad venues, and is currently working on a book on the history of advertising New York City.