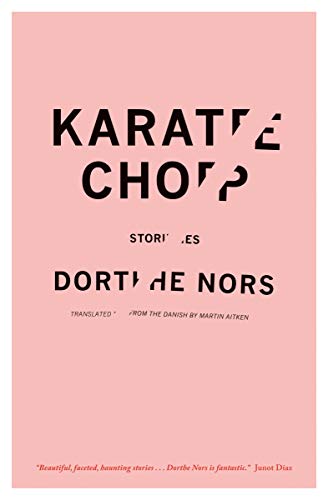 The speechwriter for the Danish foreign minister is falling apart. He is tired of writing lies for his boss, his wife is leaving him, and he’s falling into debt. Amid all the turmoil, he convinces himself that he is a tranquil Buddhist; then he lies on his resume to land a job directing a small famine relief organization.

He begins to live a delusional life: a serene Buddhist holy man to himself, a scandalous hedonist to everyone else. It all ends in a homicide-suicide. This story, “The Buddhist,” is one of 15 precisely crafted and melancholy stories in Dorthe Nors’s short story collection Karate Chop: Stories.

Nearly all of Nors’ stories share certain commonalities: they are contemporary; set in either Denmark or New York; very short (none more than seven pages); and built around characters who are deeply scarred in way one or another. Melancholy is the theme across this collection, and it is melancholy of the deepest kind.

While Nors’s fondness for sadness might turn away some readers, there is no denying her sophistication and precision as a writer. In several stories, for example, she uses lovely and perceptive animal kingdom metaphors to make her point. Below is just one example:

“Many men are like those reptiles in the zoo that puff up their faces with fanciful color and raise themselves onto thin toes and rattle. . . . She was no good at not loving them, even if there was no obvious reason to do so.”

Likewise, Nors’s characters and plots, despite their generally depressing circumstances, are nearly-always subtle and believable. When she writes about the quiet disaffection within a family rocked by unspoken sexual abuse, we understand. When she writes about herons at an urban nature preserve becoming lethargic due to overfeeding, we can infer the ill-effects of human contact with these (no-longer) wild animals.

A couple of stories in the collection break with the pessimism. “The Big Tomato,” for example, is a hopeful story of two New Yorkers in low-skill service jobs stumbling into a lovely first date. At other times, an understated humor creeps into Nors’s stories. All of this suggests that author Nor probably has a wider skillset than those exhibited most often in Karate Chop.

While the author’s balance of dark and light may render her work inaccessible to some readers, Karate Chop displays an admirable willingness to take on difficult stories, and Dorthe Nors tells these difficult stories very well.