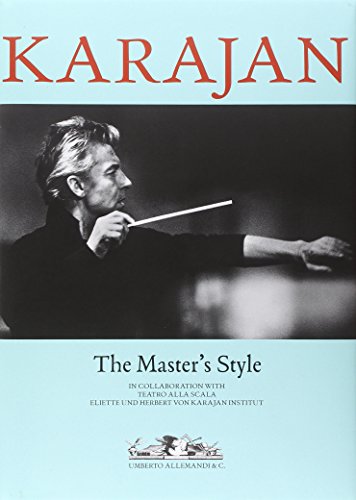 Conductors are people, too. Sometimes for the average person, it can be hard to grasp that idea because the only time we see these famous faces (or famous backs, if you will) is when they are standing on a platform in front of an orchestra, usually wearing tails or some other sort of evening dress. But in real life they have their own, more casual look for everyday life.

In Karajan: The Master’s Style, we get a glimpse into the more laid back version of the larger-than- life Herbert von Karajan. Especially in his later years, Karajan developed a style that was uniquely his “. . . with [the ever-present sweaters] he usually wore loud plaid socks and moccasins.” Sounds comfortable, but imagine if he wore those socks while conducting. . . .

The book is a photo collage of Karajan’s life from the time he was a small boy in Salzburg, through his time with La Scala, up until two weeks before his death on July 16, 1989 of heart failure. The collection demonstrates the development of the master’s style, from his lederhosen and short pants as a boy, to the more sophisticated turtlenecks and sweaters he chose to don as an aging icon. In the brief introduction, the author mentions that Karajan always knew people were watching him—even if he was not in a performance situation—and his style and care in his appearance definitely reflected this idea.

An additional aspect of the work, whether planned or unplanned, is the more sobering aging and loss of youth in subsequent photographs of Karajan. Especially in the latter third of the collection, the reader can really start to see time taking hold.

Karajan: The Master’s Style starts strongly with an eminently interesting concept. Creative people have style: whether they are artistic in some fashion, or musical. And in looking at Karajan as an icon of style and not just the musical genius we knew him to be, we begin to see the layers of his personality, communicated visually to the viewer through his clothing—much like he communicated music to his orchestras and listeners through visual movements.

But with such a small narrative at the beginning of the book, it is hard to give Karajan anything other than imagined depth based on this work alone. The concept presented has so much more potential to give us further insight into a musical genius, but unfortunately it must remain unrealized. A picture is worth a thousand words, and in this case that is good, because otherwise the book would have nothing to say.