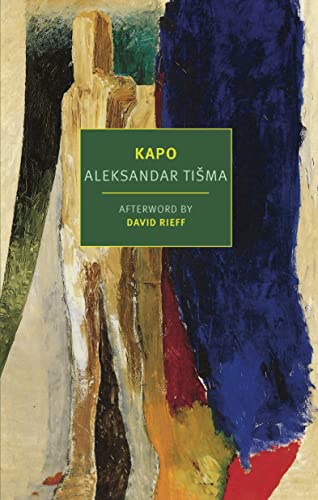 “He wanted more than anything . . . to have survived without betraying. . . . Had he only been able not to bludgeon, not to kill, to suffer and stay on the side of suffering, instead of joining those who caused it.”

In passages like this, Vilko Lamian, the Auschwitz kapo of this novel’s title—a concentration camp prisoner who survives by helping SS guards carry out their atrocities —both evades and confronts his four decades of memories. Paranoid about being recognized after the war by survivors he’d tortured, he holes up in small towns, cowers at train stations, and bribes strangers to take his paperwork to clerks at the police station.

Lamian was born in prewar Yugoslavia to a “too quiet, too meek” Jewish bookkeeper and housewife, who have him baptized as a Catholic “so that the differences [between him and the majority Catholic population] would be erased.”

The baptism doesn’t save Lamian when Germany invades in 1941. The Nazis scoffed at first-generation conversions.

What does save him is a mix of chance, cunning, and the willingness to murder others. For instance, a midlevel Nazi official at Auschwitz, impressed with the way Lamian endures a sadistic punishment, takes him on as his personal kapo.

But Lamian doesn’t only survive; he also imbibes the Nazis’ anti-Semitism. Even decades later, recalling Gabelic, a fascist fellow student who tried to recruit him at college, he thinks, “[Gabelic] was inspired by a future in which only people like him would exist, erect, handsome, blond, energetic people devoted to the common good, to progress… Gabelic was pure, and Lamian was dirty.”

At Auschwitz, Lamian’s particular amusement is to regularly select two female prisoners to rape in a secret hideaway, rewarding them with precious bread, butter, milk, and ham.

“At that moment of the day he turned into an SS man,” he thinks, “not caring what it cost the women who submitted. Because, like the SS men, he considered them only meat which was condemned to spoil.”

He becomes fascinated with one woman whom he dubs “the Clown,” later learning that her name is Helena Lifka and that she’s a fellow Yugoslavian Jew. As the novel begins, in 1983, he has decided that he must find her and beg her forgiveness.

Kapo is the third in a trilogy by the award-winning Hungarian-Jewish writer Aleksandar Tisma, who died in 2003. First published in 1987, it has now been reissued in a translation by Richard Williams.

Tisma’s accomplishment in this book is not only to explore the mindset of someone who could be said to be a victim as much as a collaborator. He also forces the reader to ask: If I were Helena, would I denounce Lamian?