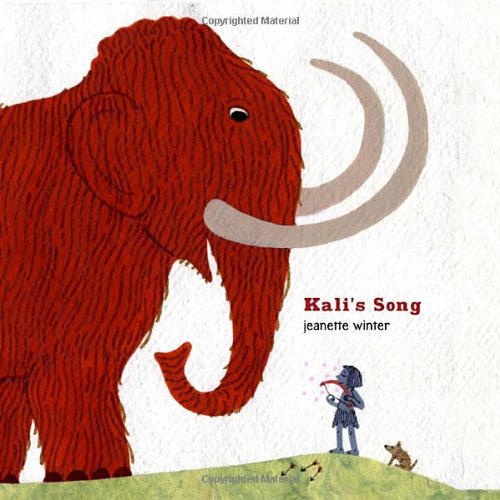 “Bravo to Jeanette Winter for this magical little book humming with hope.”

Ferdinand the bull has found a worthy companion . . . not beneath the cork trees of Spain, but in the egalitarian spirit of pacifism.

Jeanette Winter, the author/illustrator of numerous thought provoking children’s books, has crafted a gentle picture book that celebrates a cave boy who would rather make music than hunt animals.

Readers enter Kali’s world by gazing at the walls of his family’s cave, where Mother paints frolicking, earth-toned horselike mammals. Even though both of Kali’s parents expect him to grow up to pursue and kill such creatures, we have reason to suspect it will turn out otherwise.

As Kali practices shooting arrows, the sensitive boy appears more concerned about the various animals nearby than about his accuracy. His course of action becomes clearer as he discovers he can create enchanting notes with his bow: “Kali forgot about shooting arrows/ and plucked his bowstring into the night. / The stars came close to listen.”

Ms. Winter’s appealing soft-colored collages showcase textured handmade paper that evokes the boy’s sense of harmony with the world. The mottled grays in the rocks, the ragged light from the family’s fire, and the fields’ multiple hues of green all bring the reader closer to Kali’s long-ago life.

Using the paper’s rough edges to provide frames for her simple images, Ms. Winter seemingly invites readers to touch the pages, thus demonstrating a meaningful sensory experience that paper can offer that ebooks do not. A particularly pleasing double-page illustration features the peaceful profile of Kali plucking his bow, while birds and brown mammals “listened and were still.”

The youth’s moment of reckoning comes the day of the big hunt, when he encounters “mammoths that were bigger and more beautiful than any Kali had ever seen.” Suddenly, he forgets about shooting arrows and instead begins playing his bow. The musician’s spell embraces not only the magnificent herd but also the hunters who lay down their arrows and listen.

From that point, Kali continues to heed his own heart and eventually becomes known for his wisdom and his power to heal. How reassuring to see the community embracing the talents of its members and in the process, becoming stronger and healthier.

That’s a heady message for people of all ages and eras.

Bravo to Jeanette Winter for this magical little book humming with hope.