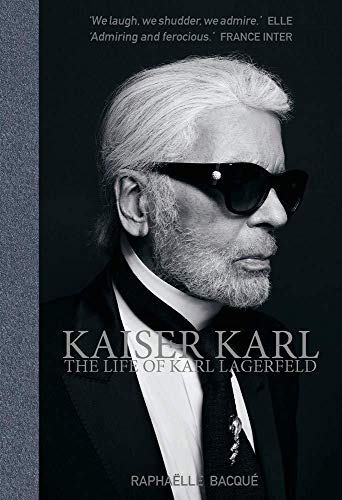 If you are in search of a photo-laden book depicting the life and times of Karl Lagerfeld, best for you to move on because this will not fill the bill.

If the prospective reader was an avid follower of the late designer and has read somewhat exhaustively about him, including the books authored by him, then it is easy to say that there are no startling revelations brought forth by Raphaelle Bacque.

The thrust of the book has been covered in a great degree by Alicia Drake’s The Beautiful Fall, albeit not in as much detail as in Kaiser Karl. Essentially, almost half of the 256 pages is centered around the ’60s and ’70s during the friendship and then the start of the rivalry between Lagerfeld and St. Laurent. In this telling there are more firsthand remembrances from those who were directly involved. One must keep in mind that a vast majority of the players from that era are no longer with us.

Bacque’s approach to the retelling of Lagerfeld’s life can be considered a sort of slap and kiss iteration, meaning she both praises him and chides him for his behavior—but again, the astute reader will not find any of this difficult to swallow. To say that Lagerfeld was a complicated man is like saying Bill Gates invented a sort of typewriter—it would be understatement in its finest form.

What is extremely absorbing about Kaiser Karl is that the reader might have at one time thought but is now more than convinced that Mr. Lagerfeld was a master manipulator. His maneuvering was not all selfish, spiteful, evil, gossipy, or for that matter exclusive of his own image. The reader has to wonder why he was so seemingly secretive, evasive, and self-contained about so much.

This reader was left with a panoply of emotions ranging from extreme admiration to near pity after reading how this man lived and what an astounding workaholic he was during his lifetime. The man had, on the surface, a tsunami of confidence in his abilities, and when looking deeper into his psyche, you might come away feeling sorry for him since he purposefully avoided any real physical attachment to anything or anyone.

The unquestionable fact is that Karl Lagerfeld loved Jacques de Bascher possibly even more than he loved himself, and yet from all accounts there was never any sort of physical relationship between them. Theirs was a symbiotic relationship on the surface, but it was so much more beneath the gossip and rumors, and this is where the sadness stems from.

This is a book to read for those who wish to know more about Lagerfeld than just  designing and  what we have previously learned of his personal demons and foibles that were the root of all his accomplishments and determination. In a way, you might say this is Lagerfeld unplugged!