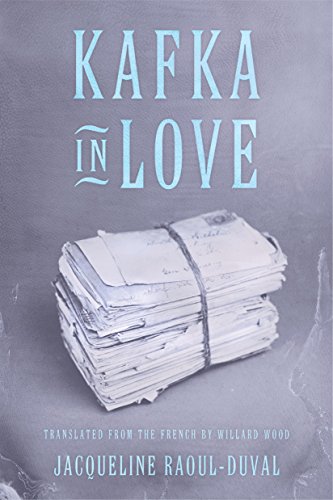 If you think love is complicated in the 21st century, back in 1912 Franz Kafka kept busy with long distance relationships largely via letters with four women he adored.

Franz Kafka, for those who’ve read his works and perhaps visited the Franz Kafka Museum in Prague will know, had a dreary administrative job in the insurance business by day, and wrote most of his novels during bouts of insomnia late at night.

In Kafka in Love author Jacqueline Raoul-Duval and translator Willard Wood offer us a look at another side of Kafka. Through research, they reveal great details by sharing his letters and diaries and forming a portrait of his longing for relationships to fill his otherwise solitary existence.

With one third of the book pulled straight from Kafka’s journals, Jacqueline Raoul-Duval has compiled a personal look at Franz Kafka’s short life during the years 1912 to 1924, when he lived with his family in Prague.

The book is presented as a fictionalized biographical sketch. As it moves quickly through the early 20th century, Ms. Raoul-Duval presents us with a memorable look at the life of this common man, who is still widely read today.

Many who enjoy Kafka’s novels and short stories can now have a fuller understanding of his life. The women portrayed here, through hundreds of letters and personal encounters, help bring Kafka back to life. We see a man driven by many impulses, not the least of which is to write, but also to spend his short life in the company of women who delighted him.

“I can love only what I can place so high above me that I cannot reach it,” Kafka wrote in a letter to his best friend, Max Brod. Mr. Brod is a significant friend and part of the story. The letters he saved helped build a record of this long friendship he and Kafka started at law school in 1903.

It is Mr. Brod who first meets a young woman named Felice Bauer and introduces her to Kafka at a party. Kafka often kept company socially with a big circle of friends, who were instrumental in encouraging him to write. “He is made of literature,” said Brod.

As Kafka begins corresponding with Felice, he finds himself enthralled with her, and later with three other women as well. He often let himself get tangled in overlapping relationships, not willing or able to break away from one woman before becoming enthralled by another.

Ms. Raoul-Duval takes us through his whirlwind life by relating the letters and relationships that rise and fall during his short life. Kafka in Love clearly honors the lives of these four women—Felice, Julie, Milena, and Dora—all pivotal to his happiness and productivity.

Yet as the epistolary evidence suggests, Kafka never found lasting peace with himself or with his lovers. Kafka in Love takes us right up to Kafka’s death at age 40, his fourth lover, Dora, at his side.